Lights dominate the Argos in round one 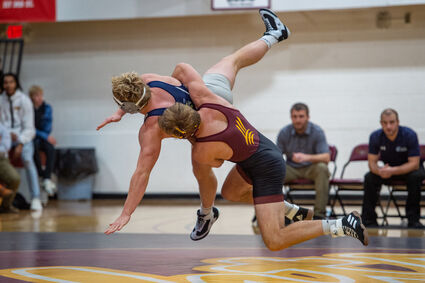 On Wednesday night at the Armory Gymnasium, the Montana State University-Northern wrestling team hosted long-time rival University of Providence. With the Argos in town, the Lights fans filled up the Armory to create an electric atmosphere.

But MSU-N head coach Tyson Thivierge believes his team's preparation was the key to the Lights' 25-9 victory over the Argonauts.

"We wrestled well. We've been working on going out and attacking and scoring points. They went out there and did that," Thivierge said. "Everything that we worked on, they put to play right here."

But he also acknowledged that the home crowd helped give the Lights energy when they hit the mats, especially after not getting to attend any duals last season because of COVID-19.

"That might be the most students I've seen at a dual in a long time. The student section was getting loud towards the end and it was a lot of fun," Thivierge said. "That's another weapon right there. That's another advantage in a home dual is your crowd."

The dual began with a match between Kaleb Frank and Deven Altenburg-Lasher. Frank wrestled for the No. 18 Lights and at 125 pounds and won the match, 2-0, to give the Lights a 3-0 lead to start the dual. In the match at 133 pounds, MSU-N wrestler Nick Kunz faced off with Joel Avila. Kunz fell behind, 8-2, but worked his way back into the match. However, Avila held on to win the match, 10-8, to tie the dual, 3-3.

Wrestling at 141 pounds, MSU-N's Martin Wilkie looked to give the Lights the lead when he faced off against Caleb Birdwell, a former Lewistown state champion.. It did not take him long as he took a 15-0 lead over Birdwell in the second period to win the match by technical fall to give MSU-N an 8-3 lead in the dual.

The Lights continued to perform well on the mats when freshman Colby Schriever grappled with UP's Gavin Gies. At 149 pounds, Schriever won the match, 12-7, to make the Lights' lead 11-3 in the dual.

Wrestling at 157 pounds, MSU-N's Connor Harris and UP's Dougie Swanson each recorded an escape in the first three periods of the match to go to overtime. In the extra period, Swanson recorded a takedown of Harris to win the match, 3-1, to cut MSU-N's lead to 11-6 in the dual.

Chase Short then took the mats for the Lights as he wrestled at 165 pounds against Jordan Komac in the most-anticipated match of the night. Heading into Wednesday, Short was the ninth-ranked wrestler in the nation and Komac was seventh. And both wrestlers showed why as they competed hard and the third period ended the match tied, 4-4. Early in overtime, Short recorded a takedown on Komac for the 6-4 victory to give the Lights a 14-6 lead. Short credited the support he got from the bench and the stands to give him a boost when overtime began.

"It was my teammates cheering me on and believing in me," Short, a senior from Great Falls said. "This atmosphere was crazy tonight. We haven't had a home dual like that in two years."

In the last match of the night, MSU-N's Rylan Moldenhauer wrestled K.C. Buday. While Buday defeated Moldenhauer, 3-1, the Lights won the match, 25-9, to move to 2-1 in duals this season. While he was happy with the result, Thivierge believes they could have performed better and hopes they can improve in time for the Colorado Mesa University Open this weekend. Thivierge believes they will need to perform better there because tournaments are where national championships are won.

"We can definitely improve. Things can get better. Just another building block," Thivierge said. "We're going to hit this tournament. We got to put a string of victories together in the tournament, score points and score team points."

The Lights will next wrestle on Saturday at the CMU Open in Grand Junction, Colorado. 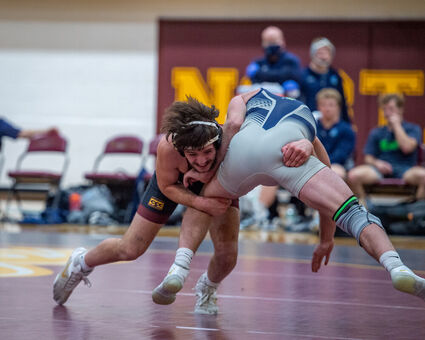