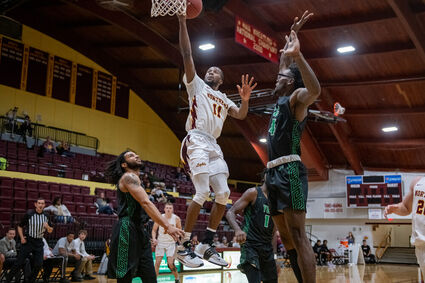 Northern's Mascio McCadney drives for a layup against Yellowstone Christian College at Armory Gymnasium Thursday night. McCadney led the Lights with 24 points in the 99-57 victory.

With a month before its first Frontier Conference game, the Montana State University-Northern men's basketball team is looking to find its stride before then. After a solid road trip in Michigan last weekend, the Lights were looking to build on that in their game against Yellowstone Christian College at Armory Gymnasium Thursday night.

The Lights wasted little time taking advantage as they jumped to a 47-27 lead at halftime. When the clock ran out at the end of the game, the Lights pulled out the 99-57 victory. While his team had control the entire night, MSU-N head coach Shawn Huse thought they could have played better in the first half.

"I didn't think we necessarily did things to get the stops, it was more of them shooting themselves in the foot there a couple times early," Huse said. "We really took a step forward last weekend in Michigan and really played well in every facet of the game and I thought we came out of the gates maybe not quite playing to that level."

Through the rest of the first half, the Lights used their 3-point shooting to keep the Centurions at bay. The Lights finished the first half shooting 11-22 from beyond the arc to go into halftime with a 47-27 lead.

"That goes back to practice and workouts," Huse said about the 3-point shooting. "We put the time in our workouts and I think that's where it comes from. You got to put that time in to get those reps."

The Lights did not cool down from three in the second half. McCadney hit another pair of threes in the opening minutes of the half and Harris hit a three from the corner to make the lead 62-34 less than three minutes into the half. From that point, the Lights cruised to a 99-57 victory to improve to 4-1 early in non-conference play. 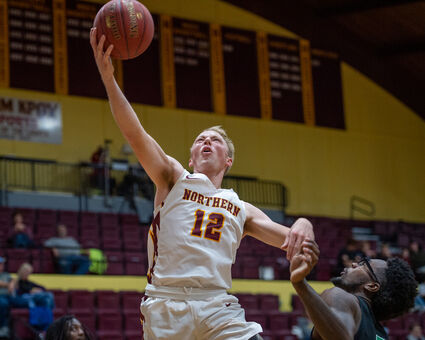 The Lights will play YCC again tonight at 6 p.m. at the Armory Gymnasium.