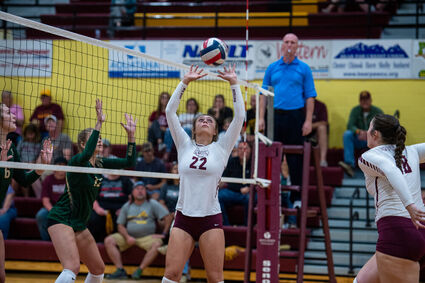 Montana State University-Northern's Emily Feller sets a pass during a Frontier Conference match against Rocky Mountain College earlier this fall. The Skylights play the Battlin' Bears in the first round of the Frontier Conference Tournament today in Helena.

Everything that the Montana State University-Northern volleyball team has worked for this season has led to this weekend as the Skylights will compete in the Frontier Conference Tournament in Helena. The Skylights enter the tournament as the No. 4 seed and will play Rocky Mountain College today to open the tournament.

While the Skylights have had their ups and downs this season, MSU-N head coach Jerry Wagner believes they have found a groove just in time for the postseason.

"We've been showing great improvement in how we're going about our business," Wagner said. "I hope to hold the seed, I hope to do very well and I think we're in a good place."

The tournament will take place over the next two days. The Skylights will play today against RMC and if they win, they will have to play again tonight. Wagner believes the tournaments the Skylights played in the preseason helped prepare them for hopefully a long weekend.

"When we went to Arizona, we played early in the morning. We played for six straight hours, playing back-to-back matches against very good teams," Wagner said. "We came out on top in some of those in what turned out to be an extremely good trip for us."

This weekend will be a single-elimination tournament so there will be no room for error. While the threat of elimination could be a source of pressure, Wagner expects the Skylights to handle it well.

"I think you have less pressure playing in these matches because if you've done the work ahead of time and you've trained your team to be up for all matches and give everything they have to be at their best, then you're just going to ask them to do that again," Wagner said.

The Skylights will face the Bears to begin tournament play. The Bears earned the tournament's No. 5 seed after finishing 3-7 in the Frontier Conference and 10-18 overall. The Skylights and Bears split the season series this fall. RMC won the first match, 3-0, in Armory Gymnasium back in September before the Skylights won on the road, 3-0, last month. If they are going to make it two in a row against RMC, the Skylights will need to be aggressive.

"We've been doing a really good job of being aggressive with the serve," Wagner said. "We won the serve and the serve receive battle with them and we'll need to do that again to be successful."

However, RMC has many strong players to watch out for. Makenna Bushman leads the Bears with 225 kills this season while Weiying Wu is third in the conference averaging 1.12 blocks a set. They also have one of the best Liberos in the nation as Ayla Embry leads the nation averaging 7.52 digs per set and is second in the country with 782 total digs this fall.

"They got the best Libero in the conference. They count on her digging a lot of balls," Wagner said.

If the Skylights win, they will play either University of Providence or Montana Tech tonight. UP earned the tournament's No. 1 seed after finishing the year 10-0 in conference play and Tech is the No. 2 seed after going 7-3 in conference play. Other teams in the tournament include No. 4 seed Carroll College and No. 6 seed Montana Western who play each other at 1 p.m. today.

While the ultimate goal of the Skylights is to make a deep run this weekend, Wagner and the Skylights know they need to just take it one match at a time starting with RMC. But regardless of what happens, Wagner expects the Skylights to leave it all out on the court.

"I never question how hard we're working out there so that's a great feeling as a coach," Wagner said. "We're solely focused on that first match with Rocky and nothing after that is guaranteed."

The Skylights play RMC today at the P.E. Center in Helena to begin the Frontier Conference Volleyball Tournament.