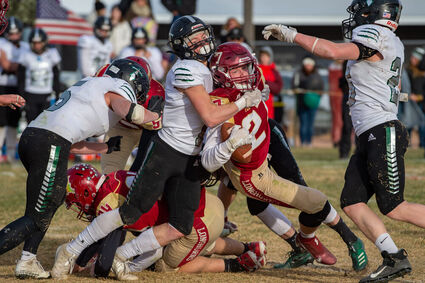 Fort Benton's Colter Ball, right, fights for yardage during Saturday's 8-Man semifinal game against Flint Creek in Fort Benton. For the second year in a row, the Titans ended the longhorn's season.

FORT BENTON - The 2021 season has been one to remember for the Fort Benton Longhorns. Along with a 6-1 record, the Longhorns won their first two playoff games to reach the semifinals this past Saturday. Unfortunately for them, the road came to an end as they lost to Drummond-Philipsburg, 38-22, at home.

While the loss resulted in the end of their season, Fort Benton head coach Jory Thompson was proud of his team's efforts.

"They did a great job today. They work super hard. It just didn't work out the way we wanted it to," Thompson said.

It was the second straight year where the Longhorn...