Lights win at home, Skylights do the same on the road 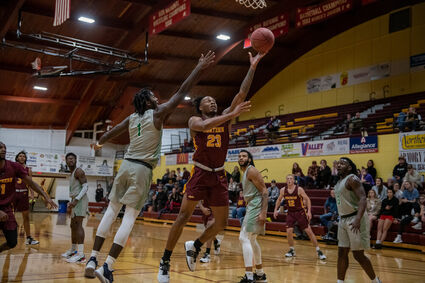 Northern's Anthony Braggs Jr. goes for a layup against Yellowstone Christian College at Armory Gymnasium Friday night. The Lights defeated the Centurions, 75-57, for the second night in a row.

After a dominant win over Yellowstone Christian College this past Thursday, the Montana State University-Northern Lights were hoping for another strong performance when they faced the Centurions again Friday night at Armory Gymnasium. MSU-N head coach Shawn Huse does not believe the Lights played perfectly, but they did play well enough to win, 75-57, to improve to 5-1 on the season.

The Lights took an early lead to start the game. A pair of 3-pointers from C.J. Nelson and David Harris got the Lights to an 8-2 lead just over two minutes into the game. However, the Centurions played hard to stay in the game with a couple of offensive rebounds that led to second-chance points to cut their deficit to 8-6.

"We didn't get enough bodies on people in our zone and they were able to come up with some offensive rebounds," Huse said.

The Lights retook momentum as they went on a 14-2 run. After scoring 24 points the night before, Mascio McCadney led the Lights with seven points during this run. He got the run started with a 3-pointer and followed it with a dunk off an alley oop from Nelson. McCadney also had a steal that he converted into a bucket during this stretch.

The Lights kept the Centurions at bay for the next several minutes. However, they were not able to put them away in the first half like the night before. After falling behind, 34-18, the Centurions came back with a 7-0 run to cut their deficit to nine points.

"I thought they did a really nice job of making some really tough shots," Huse said about the Centurions. "They played hard and they never quit. I give those guys a lot of credit."

The Lights were able to score a few baskets before the end of the half, but they only led, 44-32, heading into the break. Coming out of halftime, both teams struggled to put the ball in the basket. McCadney finally broke the scoreless lull with a layup two-and-a-half minutes into the half.

The score began a 9-2 run for the Lights to build their lead to 53-34. However, they still could not put the Centurions away. At one point in the second half, Doug Merida scored six straight points for the Centurions to cut their deficit to 10 points. Anthony White then made a floater to cut the deficit to eight points.

With the Centurions crawling back into the game, Harris made his presence felt on the court. After the Lights' lead was cut to eight, Harris made a layup to make the lead double digits again. Over the next few minutes, he made a 3-pointer and then made a layup while being fouled and made the ensuing free throw to give MSU-N a 63-49 lead with just under nine minutes left in the game.

"David proved to be a great leader and a great player tonight," Huse said. "Everybody was in a little bit of shell shock there for a moment and David stepped up and said, 'I got this guys. Jump on my back,' and gave us that extra push we needed there to make the game not interesting anymore."

"Funny thing about basketball is when shots are going, everything looks great. If they're not going in, nothing looks great, so I think for the most part, last night's game looked a lot better," Huse said. "We probably played a better game yesterday but at the end of the day, I'm still proud of my guys and they still responded."

Harris and McCadney both scored 19 points to lead the Lights. Nelson finished the night with 12 points, including a 2-for-3 mark from beyond the arc. Jesse Keltner made an impact on the boards and on defense with a team-high nine rebounds and three steals.

With their doubleheader against the Centurions behind them, the Lights can now look ahead to their next opponent, Northwest University. Not only did the Lights make it through their games against YCC with two double-digit victories, they also got plenty of film to see what they need to work on moving forward.

"I think any game you play, there's stuff to learn," Huse said. "There's always pluses and minuses and sometimes you don't even know what they are until you go back and watch the film."

The Lights will next play Northwest University Friday night.

After a win Wednesday night in Tacoma, Washington, the Montana State University-Northern women's basketball team moved on to Kirkland, Washington, for a pair of games.

On Friday night, the Skylights lost a tough bout to Northwest University,. 61-51. Northern led 16-12 after the first quarter, but from there, the Eagles outscored the Skylights 48-35. In the loss, senior Peyton Kehr scored 23 points and hit three 3-pointers, while L'Tia Lawrence added 15 points.

The Skylights showed resilience however. 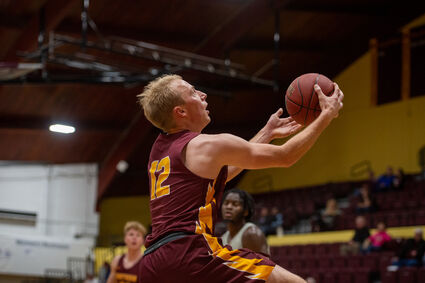 On Saturday night, Northern rebounded with an exciting, 63-62 win over Evergreen State to finish the road trip with a 2-1 record.

Saturday night's game in Kirkland was a back-and-forth affair with the Skylights leading 17-15 after one, but trailing 30-29 at halftime. MSU-N went up by as many as eight points and led by six after three, but the Geoducks stormed back and made a game of it down the stretch, though the Skylights hung on for the win.

Peyton Kehr again came up clutch for Northern, scoring 16 points, while Danielle Tyler added 11, and Lawrence chipped in with nine.

Now the Skylights (3-2) will return home for a huge showdown with perennial NAIA powerhouse Our Lady of the Lake Saturday night in the Armory.