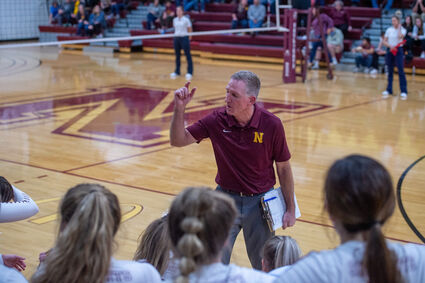 Jerry Wagner and the Montana State University-Northern volleyball team finished a strong season at last weekend's Frontier Conference Tournament in Helena. The Skylights lost to Rocky Mountain College in the first round, but it was still a very good year for MSU-N volleyball.

A season of vast improvements came to an end Friday afternoon when the Montana State University-Northern Skylights lost in the first round of the Frontier Conference Volleyball Tournament.

The fourth-seeded Skylights lost to Rocky Mountain College in the first round of the tourney Friday morning in Helena.

The Skylights were led by Alyssa Pretty Weasel and Elissa Lind, who each tallied 17 kills. Rylee Burmester added 12 kills and 23 digs. Shania Neubauer led the team in digs with 51. Emily Feller led the team in assists with 50. The Battlin' Bears were led by Bella Bryan, who had 20 kills with a hitting percentage of .327. Morgan Allen and Makenna each had 13 kills. Blythe Sealey led the team with 54 assists in the match. Ayla Embry led the team with 40 digs. MSU-Northern had a hitting percentage of .222 on the day, while Rocky hit .279. The Skylights had 64 assists, as the Battlin' Bears had 74. Northern also had 118 digs to Rocky's 122.