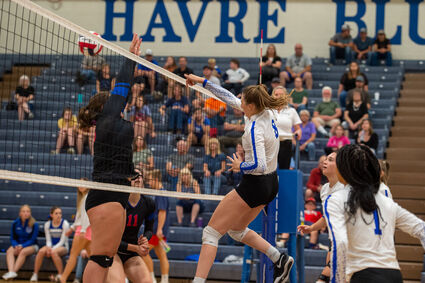 Havre's Yelena Miller spikes the ball against Columbia Falls at Blue Pony Gymnasium back in September. Miller was one of three Blue Ponies named First Team All-Conference and All-State for her performance in a season that saw the Ponies finish second at the Class A State Volleyball Tournament.

The Havre High volleyball team had a season to remember. Along with finishing atop the Northeast A in the regular season, the Blue Ponies had a strong performance in the postseason with a third-place finish in the Eastern A Divisionals and a second-place finish in the Class A State Volleyball Tournament. With such a great season, it would have been impossible for the Northeast A All-Conference and All-State teams to not recognize many Ponies for their contributions.

Three Ponies were named All-State and First Team All-Conference for their performances this season, the most of any team in...