Griz punish the Cats in 120th Brawl of the Wild 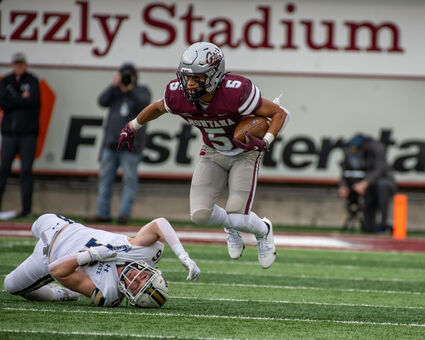 Montana's Junior Bergen runs away from the Montana State defense during Saturday's 120th Brawl of the Wild in Missoula. Bergen scored a touchdown on the second play of the game as the Grizzlies beat the Bobcats 29-10. For more photos, go to www.havredailynews.com. For more coverage, see Page B2 and Tuesday's Havre Daily News.

MISSOULA - Records, point spreads, predictions, winning streaks, none of it ever seems to end up mattering when it comes to the Brawl of the Wild. Instead, it's usually big plays and stunning moments that come to define the rivalry game between Montana and Montana State.

And so it was again.

In the most anticipated meeting of the series, in front of a record-setting crowd at Washington-Grizzly Stadium, the seventh-ranked Grizzlies shocked the third-ranked Bobcats on just the second play of the game when Cam Humphrey found a streaking true freshman, Junior Bergen, for a 74-yard touchdown p...