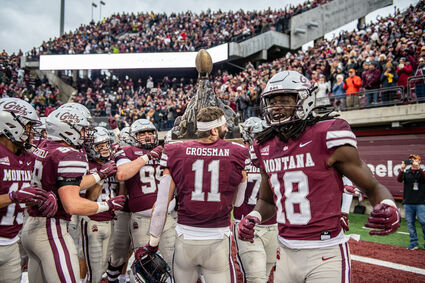 The Montana Grizzlies celebrate with the Great Divide Trophy after beating the Montana State Bobcats in the 120th Brawl of the Wild Saturday in Missoula.

MISSOULA - I gotta admit, I just didn't see this one coming.

Call me a pessimist, which so many people do when it comes to the Montana Grizzlies, or maybe it was just the fact that I had a ton of respect for what the Montana State Bobcats have built. Or just maybe, I was feeling apprehensive because it had been six, yes six calendar years since the Grizzlies had last beaten the Bobcats.

Probably all of the above.

Whatever the reasons, though, I didn't think what happened Saturday inside Washington-Grizzly Stadium, in front of the largest crowd to ever see a game in state history by the way, was possible. I just didn't see the Grizzlies dominating that way.

But that's the rivalry isn't it?

Expect the unexpected. After all, during MSU's four-game winning streak, the Bobcats were in what many deemed, a rebuilding process. So how could they win four in a row?

That's the rivalry, though. Anything can happen and it usually does.

Like when Montana had won 16 straight in the series, no one would have thought a freshman named Travis Lulay, on one of the ugliest weather days you've ever seen in Missoula, would help the Cats snap that streak. But he did, and it's now the stuff of legends.

Like I said, anything can and does happen in the Brawl of the Wild, and it did Saturday.

In a monstrous twist of irony, true freshman Junior Bergen caught a 74-yard touchdown pass on the second play of the game to give the Griz a lead they would never relinquish. Why is that ironic? Bergen was an original MSU commit, but wound up changing his mind and changing over to the Griz.

Now he, too, will forever be part of Cat-Griz legend, and he's not even 20 years old yet.

And that's how it went Saturday. One shock after another.

It wasn't shocking to see two of the best defenses in the FCS duke it out in a low-scoring affair, but it was shocking to see Montana's defense hold the Bobcats to under 100 yards on the ground after the Cats had rushed for over 300 in three straight games against the Griz, and they came in leading the Big Sky in rushing by a wide margin.

It was also shocking to see Montana win so decisively while only being able to run the ball for around 60 yards. That's something you don't see every day.

To offset that, though, UM kicker Kevin Macias was a perfect five-for-five on field goals, including booting a 50-yarder. You know what else? Macias only moved to Missoula in the summer and joined the Griz in fall camp, and not only that, having gone to Arizona State, Saturday was probably as cold as he's ever played a football game in, and yet, he was a huge hero.

And on and on the stories from Saturday went.

Troy Andersen is already, and forever will be a legend of Cat-Griz games, but it wasn't too late for him to put an even bigger stamp on his legacy by tallying 10 tackles and intercepting a pass, and for good measure, he even made a brief appearance on offense.

Perhaps not shocking, but maybe so, was the grid scoring a non-offensive touchdown, again. They've done it a lot this year, this time, cornerback Justin Ford picking up a botched MSU fake field goal to reach the endzone.

Special teams scores are always a bonus, and the Griz got a big one Saturday.

And last but not least, here's something I personally found really sticking about Saturday's Brawl - the civility. Trust me, it isn't always like that in this game, but from every observation, before, during and after the game, of which I spent plenty of time in all three phases observing, the civility between fans was next level. And, with how bitter this rivalry has become, or perhaps, how bitter we're all guilty of being toward sour fellow man these days, Saturday's civility in and around Washington-Grizzly Stadium, and all over Missoula, was shocking, but also so refreshing, and while totally unexpected, I really enjoyed it.

But again, that's Cat-Griz. You have to expect the unexpected, and there was plenty of it Saturday.

I said going in, this was perhaps the biggest Brawl of the Wild ever, for a myriad of reasons. And I don't think I was wrong. From the pregame buildup, to an awesome flyover, to the record crowd, to the game itself, the 120th meeting between Montana and Montana State did not disappoint.

And even though I didn't see it coming, I certainly won't ever forget it.