By George Ferguson and Kason Clark 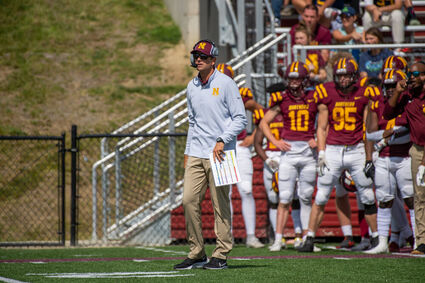 The Montana State University-Northern football program is now searching for a head coach.

Monday, Montana State University-Northern football head coach Andrew Rolin announced on his Twitter account that he was resigning from his position in the program. Rolin informed his team Monday morning that he would be moving on from the program.

"It wasn't an easy decision for myself or for my family," Rolin said Monday night. "I was extremely honored to be the head coach here at Northern and I just want to thank the players that I've had the opportunity to coach and for everything that they've given."

Rolin was introduced as the 21st head coach for Northern Dec. 21, 2017. Before that, he had gained coaching experience at the FBS and FCS levels. After graduating from University of San Diego in 2009, Rolin joined the Tritons' coaching staff and coached the running backs for three years. He then spent a year on the University of Washington offensive coaching staff as a graduate assistant.

Rolin then joined the San Jose State coaching staff in 2013. From 2013-2015, Rolin served as the running backs coach for the Spartans. In 2016, he served as the wide receivers coach as well as the recruiting coordinator. Rolin came to the Spartans after spending 2012 as a graduate assistant at the University of Washington. He worked with the offensive coaching staff, primarily with a tight ends group that featured John Mackey Award finalist Austin Seferian-Jenkins. Rolin also helped guide a running backs crew that included Bishop Sankey, who ranked fourth nationally in rushing in 2013 with 1,870 yards and 20 TDs.

The 2009 University of San Diego graduate majored in business administration. He began his coaching career that same year at his alma mater. Rolin coached the team's running backs for three seasons. In that time, three Torero running backs received All-Pioneer League post-season honors, including Kenn James, who was ranked second nationally (FCS) in all-purpose yards in 2011.

As a player, the Rancho Cordova, California native was a quarterback on the 2005 through 2008 USD teams that won three conference championships and had a 40-6 win-loss record. In that time he played for both head coaches Jim Harbaugh and Ron Caragher.

In his final stop before Northern, Rolin served as the offensive coordinator for Libby High School in Montana in 2017.

While his time leading the MSU-N football program will come to an end, Rolin said he was thankful for those four years leading the Lights. Not only does he value his time with the players, but he also values the time he spent in the community of Havre.

"It's one of the more special places. One of the more underrated places, I think, out there and I think Havre showed me and my family what it means to be a community," Rolin said. "I'm just extremely grateful for this community and everything that they've given us."

Northern Athletic Director Christian Oberquell said Monday that a search committee will be formed to find the Lights' next head coach as soon as possible.