Havre High has strong numbers in the pool again this winter 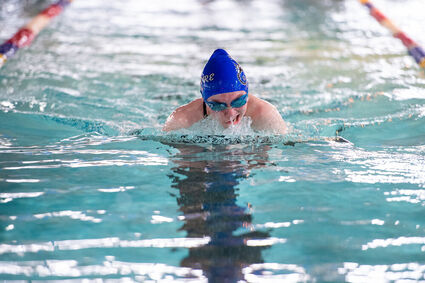 While the weather will get cold this winter, the Havre swim teams won't be afraid to get back in the pool as they get ready for this season.

As the Blue Ponies stay indoors and dive into the season, HHS head coach Bill Kilgore just wants to see his swimmers compete hard and enjoy the sport.

"My expectation is always for the kids to enjoy the season and have fun," Kilgore said. "We're going to work hard and do the very best we can."

The Ponies will also have several newcomers to the lineup this season. While it is too early to see who will make an impact, Kilgore has been impressed by swimmers such as Hailey Gingery, Lindsey Leinwand and Ada Pratt early on.

With the season coming up, Kilgore looks forward to their first meet this Saturday in Polson because he will finally get to see his swimmers compete this winter.

"I always look forward to the first one just to get a gauge of where our kids are at," Kilgore said.

The Ponies will compete in several other big meets through the season. Their most anticipated meets will be held in Great Falls over the next few months. Next month, the Ponies will compete in the Great Falls relay meet and will return to Great Falls for another meet in January during a stretch where they compete in meets every weekend. But the meet that Kilgore and his team have their eyes on this season will be the state meet in February. Havre also hosts the Havre Invitational and Class A Meet in back-to-back weeks at the Havre Community Pool.

As the Ponies head into the season, they obviously hope to compete. But when it comes to having a successful year, Kilgore believes the season will be a success if his swimmers can grow and come together as a team through the course of the year.

"A successful year for me is not about wins and losses. It's about the kids learning, growing and having a good time and coming together as a team," Kilgore said. "If we can make all that happen, to me that's a successful year. Anything else is kind of icing on the cake."

The Ponies will begin their season this Saturday with a meet in Polson.