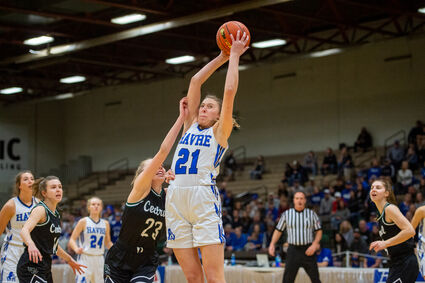 Havre High's Yelena Miller grabs a rebound during the 2021 Class A state championship game in Great Falls. The Blue Ponies will be heavy favorites to win another title this season.

Turn up the heat, turn on the lights and fire up the bands. High school basketball is back on the Hi-Line, and across Montana. And it's going to be a fun season, indeed.

After the pandemic altered a lot about how the 2021 hoops season was played, including a delayed start, a late ending, altered tournament formats and limited capacities in gyms around the state, things will feel much more normal this winter.

And what will also be normal is the continued good basketball played on the Hi-Line. Last year saw two more state titles come back to our area and four state trophies overall, and with so many good teams, good players and good coaches, the next three months figures to be no different.

1. Can the Blue Pony girls do it again?

Havre has won three of the last four Class A state championships, including last year's overtime thriller against Central. The Ponies lost a bunch of great players from that team, but you never bet against a Dustin Kraske squad. He returns a veteran group led by Sadie Filius, Yelena Miller, Avery Carlson and former North Star Knight Jade Wendland, and that group, plus just the fact that Ponies are such a juggernaut, make them heavy favorites to win another state championship this March in Missoula.

2. Huge rivalry brewing in Class B

The Rocky Boy boys were a little down last year and the pandemic affected both the Stars and Harlem Wildcats, who came up one game short of reaching the state tourney. This winter however, both Harlem and Rocky Boy are absolutely loaded with star players, and though they're in opposite districts, they play twice during the regular season, and, they very well could be two of the best teams in all of the Northern B, and that's going to make for some great battles this winter.

The Fort Benton girls won a state championship and the boys played for a Class C trophy last year. They both also won Northern C crowns, so it was certainly the year of the Longhorn. Graduation, however, hit both teams hard, and the girls lost their head coach. So, it begs the question, how good will Fort Benton hoops be this season? The boys will have five new starters, and the girls will be much younger. But with how good both programs have been since joining the 9C, don't count either of them out.

4. Can the Ponies get to Missoula?

Havre has been, oh, so close to reaching the state tournament the last couple of years. But, the last time the Ponies made it to state was 2016, when it was held in Dahlberg Arena in Missoula. The Class A state tourney is back there this March, so hopefully that's a good omen. However, Havre will have four new starters this season, and the Ponies play in the rugged Eastern A, so getting to state will be a challenge for veteran head coach Walynn Burgess' club.

Last year it was the North Star girls who shocked the 9C tourney. So who might it be this year? There's lots of possibilities, including both the Box Elder boys and girls, as well as the CJI boys and the Big Sandy boys. Don't count out the Hays-Lodge Pole girls from making a run either.