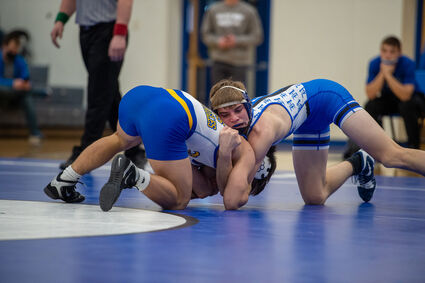 Havre's Riley Pleninger wrestles against Lewistown at Blue Pony Gymnasium back in January. Pleninger will begin his final season as a Blue Pony this Friday at the Havre Mixer.

As winter arrives in Havre, so, too, does the new season for the Havre High wrestling team. Many seniors will hit the mats for the last time this winter, including Riley Pleninger. As he heads into his final season with the Blue Ponies, he is just happy to get to compete one last time.

"(I look forward to) that final push towards divisionals and state," Pleninger said. "Just one last time to hang out with all my friends and put in all the work."

Pleninger has had a strong career for the Ponies. In the 2020 state championship, he placed third as he wrestled in the 120-pound weight class....