Blue Ponies look to stay strong on the mats 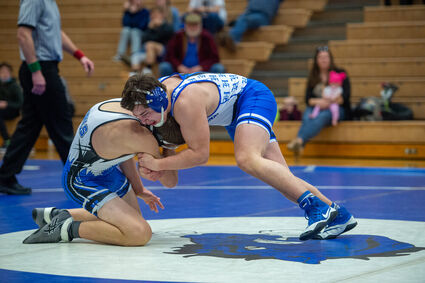 Senior Randy Tommerup, right, and the Havre High wrestling team makes its season debut this weekend at home when the Blue Ponies host the Havre Mixer Friday and Saturday at the HHS gymnasium.

The Havre High wrestling team had a solid end to the season this past March. Along with finishing sixth as a team at state, two Blue Ponies won state titles. As they get ready for this season, HHS head coach Beau LaSalle hopes for a similar outcome this winter.

"The expectations are the same as they always have been - compete hard every weekend and by the end of the year, come home with a trophy from the state tournament," LaSalle said.

Many Pony wrestlers return to hopefully lead the team to success on the mats. Orion Thivierge returns after winning a state title wrestling in the 170-p...