Lights survive the Raiders on the mat 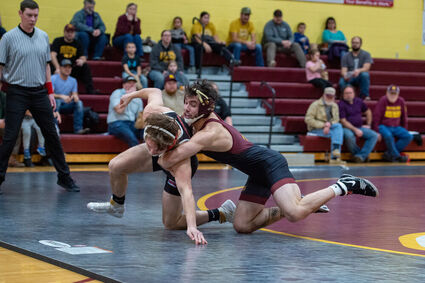 Northern's Martin Wilkie wrestles against Nick Peterson Thursday night. Wilkie pinned his opponent in the third period and the Lights won the dual, 26-21.

It had been nearly a month since the last time the Montana State University-Northern wrestling team had competed at home at Armory Gymnasium. During that time, the Lights had traveled to Colorado and Washington for competition. Thursday night, the Lights finally returned home and defeated Southern Oregon University, 26-21, in a dual. However, MSU-N head coach Tyson Thivierge was not satisfied with his team's performance.

"I don't think we performed to our best," Thivierge said. "We had some tough matches, not moving our feet well, getting taken down and giving up big points. Gave up a pin...