Pony boys looking to climb the Eastern A ladder 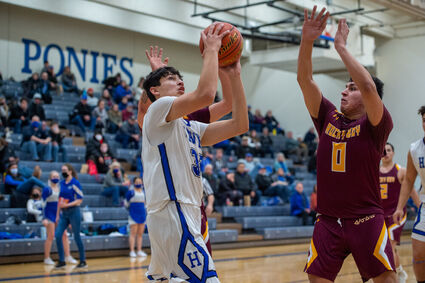 Isaac Pedraza, left, is a key returner for the Havre High boys basketball team. The Blue Ponies lost four starters from last year's squad but are still poised for big things this season, a season that opens tonight in Laurel.

Preparing for any season is a tough task for any coach, but Havre High boys basketball head coach Walynn Burgess will have an especially challenging task this winter as he tries to replace the loss of five seniors from last season.

But Burgess looks forward to this season and hopes that his team will be up to the task.

"(We hope to be) getting better every game," Burgess said about his expectations for this season. "We're just really excited about the opportunities that are going to be in front of us."

The Blue Ponies are hoping to build off of last year when they went 9-6 and were elim...