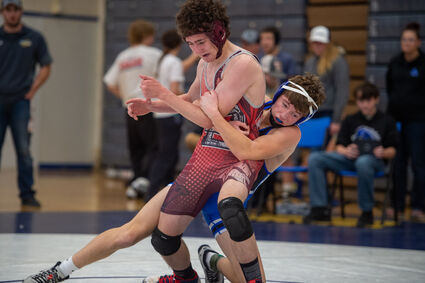 Havre's Carson Harris wrestles at the Havre Invitational at Blue Pony Gymnasium Saturday. The Blue Ponies went on to win their opening tournament of the season.

Last season, the Havre High wrestling team had to compete in duals throughout the year. Now this winter, the Blue Ponies will once again get the chance to compete in tournaments, starting with the Havre Invitational at Blue Pony Gymnasium this past weekend.

On Saturday, the Ponies competed against wrestlers from other schools such as Cut Bank, Lewistown, Chinook, Malta, Chester-Joplin-Inverness, Butte Central and Big Sandy. At the end of the day, Havre finished first in the tournament with 243.5 points.

"I thought we did a pretty good job. I think there's a lot of places to improve," HH...