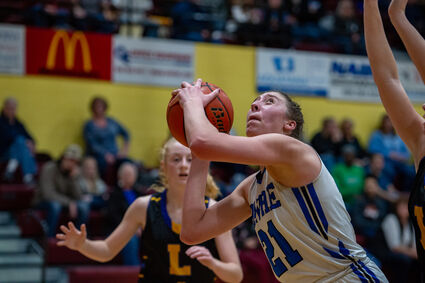 Havre High's Yelena Miller eyes the basket during Friday night's Eastern A game against the Laurel Locomotives in the Armory Gymnasium. Miller and the Blue Ponies got a battle from the Locomotives, but Havre prevailed to begin the 2021-22 season undefeated.

In their first game since winning the state title back in March, the Havre High Blue Ponies got everything they could handle from Laurel in their season opener Friday night at Armory Gymnasium.

The Locomotives took an early lead and they battled the Ponies throughout the night. However, Havre was able to survive the slugfest and come out the other side with a 50-47 victory to start the season.

"We played well at times, we played poorly at times and we gutted it out at the end and I'm proud of our kids," HHS head coach Dustin Kraske said. "I knew it would be a dogfight. We're lucky that...