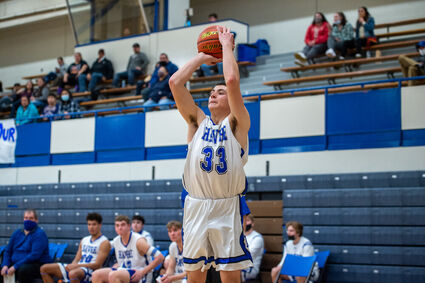 Havre's Caden Jenkins shoots the ball against Rocky Boy at Blue Pony Gymnasium last season. Jenkins scored 11 points in the 52-42 win on the road at Laurel Friday night to open the season.

Heading into their season opener on the road at Laurel Friday night, the Havre High boys basketball team had a lot to overcome. Not only do the Blue Ponies have five new starters in their lineup, but this young team had to go on the road to start the year. However, HHS head coach Walynn Burgess believes his young team showed well as they defeated Laurel, 52-42, to open the season.

"Just being able to go down south and get a W, it was good," Burgess said. "It was a good time for the boys to grow up and get ready for the season to go."

While Havre defeated Laurel by 10 points, the Ponies a...