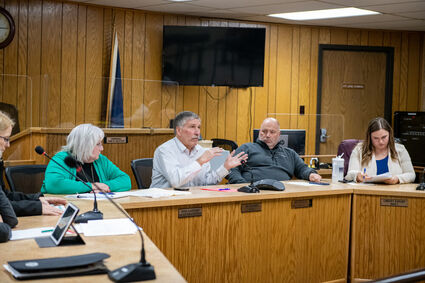 Havre Mayor Tim Solomon gestures while talking during a meeting of Havre City Council. After comments at the meeting unanimously opposed reclassifying Havre as a class two city, the council unanimously voted against the proposal.

After overwhelming pressure to do so, the Havre City Council voted unanimously Monday evening to reject a resolution classifying Havre as a class two city based on its population.

This issue has become one of intense controversy with people on both sides of the argument at the meeting accusing the other of peddling misinformation.

Members of the council have argued that reclassifying Havre as a class two city would increase the city's chances of receiving grants, as they would be competing with communities with population sizes more comparable to Havre's.

They argued that there are grants Havre does not have access to because it currently classifies as class one along with large cities like Bozeman which Havre has a difficult time competing with for grants.

Monday evening's meeting largely revolved around merits of this argument, which public attendees, many of them members of or associated with, the Havre Fire Department said is false, some calling the argument a "rumor," and accusing the council of misinforming the public.

Community member Katie Kimberling said as a nurse she uses evidence-based practices, and claimed it is proveably more advantageous to be at the bottom of class one than the top of class two.

Community member Cody Miles also spoke at the meeting, saying he spoke with relevant parties at the state level who told him that class has nothing to do with grants.

"The misinformation came from the council, we were sold something and someone did some fact checking on you," he said. "And I have, what they call in a court of law, hard evidence. It is what it is."

He implied that this perceived dishonesty is the reason Havre can't convince people to vote in favor of mill levies.

Council Member Lindsey Ratliff agreed with members of the audience, saying she called class two cities across the state, spoke with financial directors, city managers, Bear Paw Development Corp. Executive Director Paul Tuss and Montana State University Local Government Center Director Dan Clark and asked them, how often have they have had to list their city classification on a grant application and they responded by saying they never have.

When asked about this issue Tuss said Ratliff's statement is accurate and he doesn't see any advantage in grant applications by moving to class two.

"I'm unfamiliar with any advantage that would accrue to a city that would be classified as a class two community versus a class one community," Tuss said.

Clark had not responded to a request for comment by print deadline this morning.

Ratliff said she doesn't know why this reclassification was being sold as a way to get more grants, which she said her month of research appears to contradict.

After the meeting, council member Andrew Brekke, who has voiced his support for reclassifying the city as class two, said that it's true that class isn't noted on grant applications, but to say that this proves it's irrelevant is reductive.

He said cities designated as class one are assumed ineligible for a lot of grant opportunities at the state level because class one cities are assumed to have a large tax base that can sustain themselves more easily, so whenever Havre applies for grants they end up competing with palaces like Bozeman and Missoula which have great perceived needs just because they have so many people.

He said reclassifying Havre as class two would instead put them in competition with towns like Livingston, which they will have a much better chance of beating in the battle for state grants due to a more comparable population.

Brekke said there also appears to be a persistent belief among the public that class, in this context, has something to do with Havre's worth as a city and that's completely inaccurate, saying it is merely a matter of population size.

The second matter of contention at the meeting was the effect this reclassification would have on the Havre Fire Department.

Montana state law dictates that class one cities are required to have paid fire departments, while class two cities have a choice to have either a paid or volunteer fire department.

Council members and Havre Mayor Tim Solomon have all said they have no intention of changing anything at the fire department and that grants are their only concern with this matter.

Havre firefighters attended the meeting including Cody McLain, who criticized the council for not following through on educating the public on their reasoning behind this proposed change, calling it a direct attack on the fire department.

Havre Firefighter Chase Hanson went further, saying the fire department has consistently been under attack by the city during his time there.

Hason characterized the conflict between the city and Hill County regarding payment of the ambulance service in 2020 as Havre Mayor Tim Solomon trying to tell the service that they can't serve the county.

This conflict was an attempt by the city of Havre to get the county to pay more for ambulance services outside city limits, which they said didn't reflect how much the service does in that area.

Finance and City Clerk Doug Kaercher, who will replace Solomon as mayor next year, said at the time that the city had been subsidizing the service because the county was only paying for about 5 percent of the service but out-of-city calls account for 28 percent of Havre ambulance calls.

Solomon said at the time that this was an issue he's tried to bring to the county numerous times over the years via letters to the Hill County Commission, which he said had been ignored.

2020's letter, sent that February, said if the county didn't respond the city would have to discontinue responding to calls outside the city limits in June because the service was facing a shortfall and the city couldn't afford to continue subsidizing it.

"We decided we needed to put a deadline on it so they would at least talk to us," Solomon then said.

County voters ended up passing a levy to increase county funding of the service in November 2020, approving the levy with 66 percent in favor and 34 percent opposed.

Hanson also cited the city's recent conflict with Rural Fire District 1, which he similarly characterized as Solomon telling them the fire department could not serve people in RFD1.

RFD1 is essentially a ring around Havre in which the Havre Fire Department provides fire suppression services, but last December the city announced it would cancel the previous contract effective at the end of June to enable writing another contract which delegated responsibility for enforcing fire codes in the district.

During that conflict Solomon said there were buildings in RFD1 that were being built with fire code violations and they needed someone local to handle enforcement of these codes for the safety of residents and Havre's firefighters.

The board and the city failed to reach a new agreement by the original deadline, leaving Rural Fire District 1 unprotected, at least on paper. After the deadline passed, Solomon gave an extension that would have run out July 15, but was extended again through the end of July and again to the end of August.

The conflict came to a head when RFD1 allowed that deadline to pass, after which the district was again left unprotected, again, on paper at least.

After a tense meeting the day after the deadline passed, one last two-week extension was granted on the understanding that the RFD1 board would work toward appointing someone to enforce fire codes, and a new contract was eventually signed appearing to bring the issue to a close earlier this year.

At Monday's meeting Solomon objected to the characterization of him as someone trying to limit the department, saying both of those conflicts were fought for the benefit of the department.

After the meeting, Brekke characterized the concerns of the fire department as a red herring, albeit one that many believe sincerely.

He said the reality of the situation is that even if the council wanted to "be horrible people" and try to gut the department it would require ordinance changes and a number of other steps to make that change, one that would be wildly impractical to the point of being realistically infeasible.

He said this is why concerns propagated on social media about fire protection insurance rates going up are false, as well, because they would only change if the fire department went all volunteer and subsequent evaluations of equipment quality, water availability and more factors indicated that a change is necessary, none of which will happen.

During the meeting, prior to the vote, Brekke said he respects Ratliff's research and everyone who showed up, but there is still a tremendous amount of misinformation about this issue out there, especially on social media.

He said he stands firm in his position that the city will benefit from being class two but that it was clear that the public is not comfortable with that and so he would vote no on the resolution.

However, Brekke said, he thinks they need to revisit this issue later when everyone is better-informed. He said he takes some of the responsibility for the lack of education on the subject and the resulting misunderstandings.

He also said the council has been the subject of intense public backlash that has manifested in hateful and insulting messages and said the proper forum for disagreement about issues is meetings like this, not social media.

Ratliff also made the comment that if the public wants to be more informed about how the city works they need to make an effort to engage with them.

"People need to show up to meetings, not just ones that they are ticked off about like this one," she said. 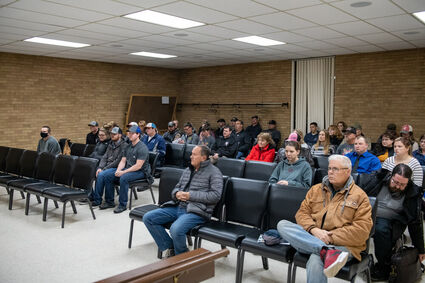 A large audiences listens during a discussion of reclassifying Havre from a class 1 to a class 2 city during Havre City Council's meeting Monday. The council unanimously voted down reclassifying the city.

She said the city is constantly having meetings where they're talking about infrastructure, funding and improvements to Havre, and most of the time members of the press are the only people who show up, and if people want to be informed about these things they need to be there.

Members of the council thanked attendees for coming.

During the meeting the council also approved the appointment of Calvin Greiff as probationary police officer, at the recommendation of Havre Police Chief Gabe Matosich.

After Monday's meeting the council's ordinance committee met to continue discussion about proposed ordinances that would prohibit the street parking of trailers and recreation vehicles for extended periods of time, affect how vehicles can be parked on properties when not in drive ways and replace some outdated policies regarding requirements for curb cuts, when a curb is cut to connect a street to another roadway or driveway.

No decisions were made at the meeting.

Brekke said he just wanted to get an idea of where the committee is at and get a direction before writing up a potential ordinance to review.