Blue Ponies head to Malta for a doubleheader 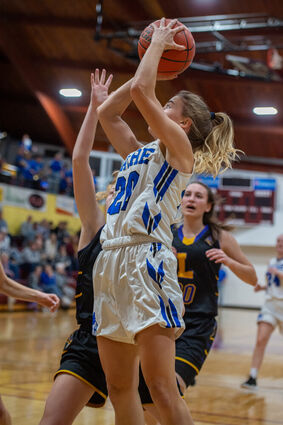 Havre High's Avery Carlson shoots during the Blue Ponies' game with the Laurel Locomotives last Saturday in Havre. Both the HHS boys and girls are in Malta tonight for their first road games of the season.

Both Havre High basketball teams opened their seasons with tough wins over Laurel this past weekend. And things will not get any easier for the Blue Ponies tonight as both teams will head to Malta.

"We are heading east to be in for a battle. Malta will be a good test for us on the road," HHS boys basketball head coach Walynn Burgess said. "We are looking forward to the challenge."

Tonight's games will be the season openers for the both Malta teams who are coming off strong seasons. The Malta boys basketball team finished 13-7 last year, won the District 2B and took fourth in the Northern...