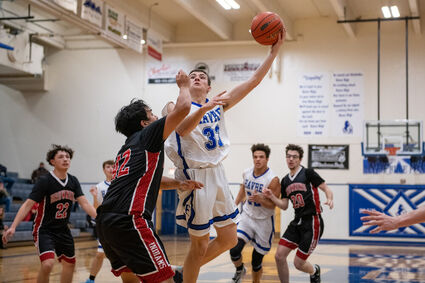 Havre High's Caden Jenkins, right, shoots over a Browning defender during a 2021 game last season in Havre. Jenkins, who has played with a cousin and his younger brother now, says basketball has always been a family affair. He and the Ponies are off to a 2-0 start and host top-ranked Billings Central Saturday.

Heading into this season, the Havre High boys basketball team had a lot to overcome as they lost four starters from last season. However, their lone returning starter, senior Caden Jenkins looks forward to stepping up and leading the young team this winter.

"(I'm looking forward to) helping these younger guys since our team is young," Jenkins said, "(help them) build a program for the future. I just want to set an example for them."

Jenkins is one of three seniors on the team this season along with Caleb Spangler and Josh Currie. The Blue Ponies' senior leadership has been key to their f...