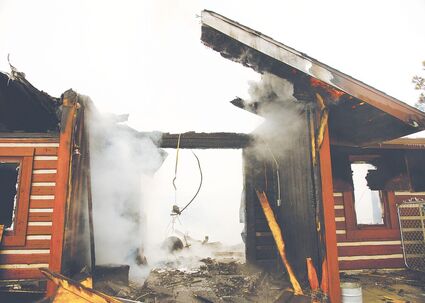 The entrance to St. Mary's Catholic Church burns on Rocky Boy's Indian Reservation Dec. 14. 2019. Work is underway to rebuild the church, but the parish still needs $300,000. Two anonymous donors each have pledged to match $10,000 if that much is raised by Giving Tuesday next week - the two-year anniversary of the fire - and the parish is calling out for people to donate to help rebuild the church.

The effort to raise the remaining funds to rebuild the Catholic church at Rocky Boy's Indian Reservation has a shot at a major boost, and the parish is asking people to help meet the goal.

Lori Osgood, a member of St. Mary's Catholic Church and the director of religious education there, said two anonymous donors each have pledged to match $10,000 in donations if that can be reached by Tuesday of next week - both Giving Tuesday and the two-year anniversary of the fire that destroyed the log church.

The Rev. Joseph Tran, priest of the...