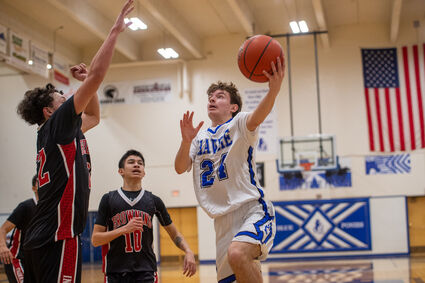 Havre's Josh Currie drives for the score against Browning at Blue Pony Gymnasium last season. This Saturday, the Blue Ponies will host defending state champions Billings Central in their home opener as they try to avenge a loss to the Rams in last year's Eastern A Divisionals.

Despite having a young team coming into the season, the Havre High boys basketball team has been able to grind it out on the road for two wins to start the year. The Blue Ponies will have another test this weekend when they host defending state champion Billings Central this Saturday afternoon at Blue Pony Gymnasium. While the Rams have lost some players from last year, HHS head coach Walynn Burgess expects a tough outing this weekend.