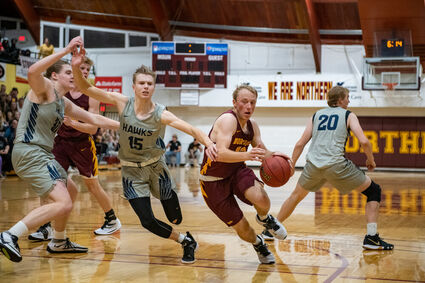 Montana State University-Northern's C.J. Nelson, right, drives the ball during a game against Dickinson State back in October in Havre. The Lights and Skylights have rematches with the Blue Hawks Sunday in Dickinson, North Dakota.

After one of their toughest conference-openers in recent years, the Montana State University-Northern Lights and Skylights will return to non-conference play for the rest of December.

That however, doesn't mean things will get any easier. Northern starts the rest of its non-league slate this Sunday with rematches against Dickinson State in Dickinson, North Dakota.

The Lights and Skylights opened the season with wins over DSU back in October. The Skylights beat the Blue Hawks 75-58, but Northern head coach Chris Mouat knows things will be much more difficult on the Blue Hawks' home floor.

"They're a talented team that's had several close calls," Mouat said of the winless Blue Hawks. "They just haven't had the ball bounce their way, but they've been close and they're hungry.

"So we know we have to go down there and play our best basketball," he continued. "I am proud of the way our kids have bounced back this week. That was a tough two games last week, and our kids have come right back, and they're working really hard."

The Skylights come into Sunday's affair at 3-6 overall, and having suffered tough losses to nationally ranked Carroll College and arch rival Providence, so there's no doubt they will be looking to bounce back in a big way.

The Lights on the other hand, don't need to bounce back. They did lose a tough Frontier Conference opener at Carroll last Thursday night, but they rebounded to beat the Argos last Saturday, and they bring an 8-2 record into Sunday's game at DSU. The Lights also have a win over the Blue Hawks, as they won in Havre back in October in a wild game, 72-68.

And while MSU-N head coach Shawn Huse won't take DSU lightly, he is encouraged by the way his team is playing as December rolls on.

"Road games are challenges in and of themselves," Huse said. "Dickinson has plenty of weapons at all spots. They really put the pressure on us to squeak it out at home early this year. We have our work cut out if we are going to get them in their gym.

"I like how we are playing but this season has only begun," he added. "We have a long ways left to go. The good thing is we know that, and this group is not afraid to work on our preparation. Which is the most important part to getting better as the season rolls along."

Sunday's games in Dickinson tip off with the women's game at 2 p.m. and the men to follow. The Lights and Skylights then head to Arizona next week.