Rams too tough in the Blue Pony Corral 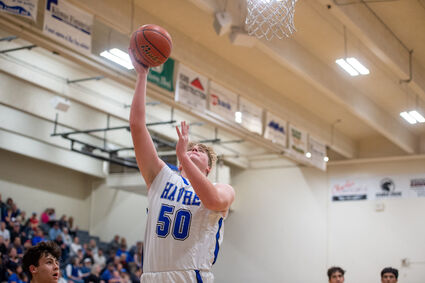 Havre's Caleb Spangler goes for a layup against Billings Central at Havre High Gymnasium on Saturday. The Blue Ponies suffered a 50-38 loss to the Rams for their first loss this year.

The Havre High boys basketball team had to grind it out on the road for victories against Laurel and Malta to start the season. So the Blue Ponies were probably happy to finally get to play their home opener against Billings Central at Havre High Gymnasium Saturday afternoon.

However, the Rams controlled most of the game and despite a late rally by the Ponies, the Rams held on for the 50-38 victory.

“Got to give it to Billings Central. They’re the state champs for a reason last year. They’re really talented, they play hard, they do a lot of good little things,” HHS head coach Walynn Burgess said. “It’s just a good measuring stick for us to see where we’re at and I think we battled. We didn’t let the game get away from us at all.”

It was a slow start for both teams on offense. In the first few minutes of the game, the Ponies turned the ball over several times while failing to score. The Rams only scored on three free throws for a 3-0 lead halfway through the opening quarter. After a Billings Central bucket to make the score 5-0, the Ponies finally got on the scoreboard with a layup from Shane Patascil with two and a half minutes left in the quarter.

“They’re just very fundamentally sound,” Burgess said about the Billings Central’s defense. “They’re always in the right spot, they play physical, they get after it.”

The Ponies were able to get some rhythm on offense as they went on a 9-3 run over the next five minutes of the game. Many Ponies made plays during this run, including Crawford Terry who made a layup to give Havre an 11-10 lead.

But Havre could not hold onto momentum as the Rams responded with an 11-3 run for a 21-14 lead at halftime. During that stretch, Cayden Merchant took over the game as he dominated in the post to score eight points in the final five minutes of the half.

The Rams’ momentum carried over into the start of the second half as they continued to build their lead. After Caden Jenkins made a pair of free throws for the Ponies to start the half, the Rams went on a 9-0 run to make their lead 30-16 with five-and-a-half minutes left. As the Billings offense got on a roll, the young Havre offense failed to respond.

“We made a lot of mental mistakes today and that’s what we’re going to get with a growing, young team like we are right now,” Burgess said.

The Rams ended the third quarter with a 39-27 lead and even made the score, 41-29, with seven minutes left in the game. However, the Ponies did not go away quietly as they went on a 9-3 run to cut their deficit to six points with two and a half minutes left. But Billings Central ended the game on a 6-0 run to pull away for the victory.

The loss dropped Havre to 2-1 on the season. Jenkins led the Ponies with 17 points while Xavier Butler and Caleb Spangler each chipped in six points in the losing effort. The Rams improved to 2-0 this season. Quentin McEvoy led the Rams with 18 points while Merchant finished the night with 12. As a team, the Rams went 15-for-21 from the free-throw line.

While the results were not what he would have liked, Burgess said he thinks the experience of playing a state champion will help his team down the line. Burgess also liked the fight he saw from his team despite the large deficit and hopes to see that throughout the season.

“These kids like to keep fighting. They were never really out of the game,” Burgess said. “They’re always ready to go to battle no matter what.” 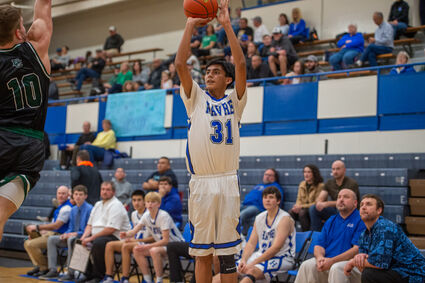 The Ponies will next play Glendive at the Havre High Gymnasium this Friday at 7:30 p.m.