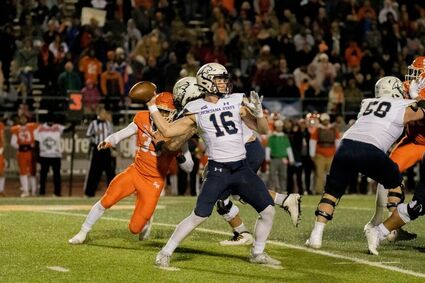 Montana State's Tommy Mellott throws a pass during Saturday night's FCS quarterfinal against Sam Houston State in Huntsville, Texas. The Bobcats throttled the No. 1 Bearkats and will how host an FCS semifinal game against South Dakota State this Saturday in Bozeman.

Mellott scored two rushing touchdowns and caught a scoring strike in addition to his two touchdown runs. He gained 76 yards on the ground and 165 through the air. The Cats rushed for 190 yards, holding Sam Houston to 79.

"We knew we needed to run the ball," Bobcat coach Brent Vigen said, "and stop the run. We did both of those things, and I think had more explosive plays than them. That...