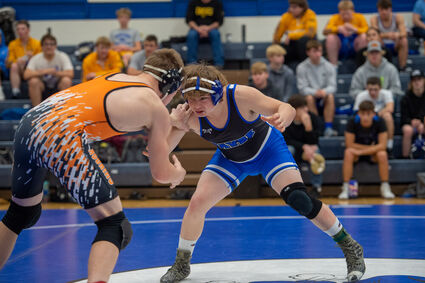 Havre's Pierce Caplette wrestles at the Havre Invitational at Havre High Gymnasium earlier this month. The Havre High wrestling team will compete at the CMR Holiday Classic this weekend in Great Falls.

With two tournaments already in the books, the Havre High wrestling team is beginning to find its footing early in the season. Now the Blue Ponies head to their biggest tournament so far this season in Great Falls this weekend with the CMR Holiday Classic.

With the large tournament ahead of them, HHS head coach Beau LaSalle hopes to see his team continue to compete like they have all season.

"(We expect to) just go out, compete hard, hustle and just basically see where we're at in the big tournament," LaSalle said. "To get everybody in that big tournament environment, it'll just be fun...