Havre girls basketball looks to bounce back from overtime loss 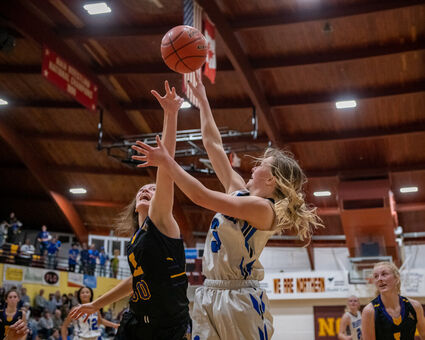 Havre's Liz Haney shoots the ball against Laurel at Armory Gymnasium earlier this month. For the first time this season, the Havre High girls basketball team will play at Havre High Gymnasium when they host Glendive and Sidney this weekend.

This past Saturday, the Havre High girls basketball team suffered its first loss of the season in an overtime loss on the road at Billings Central. The Blue Ponies now get the chance to bounce back when they return home to Havre High Gymnasium this weekend to host Glendive and Sidney in a back-to-back. Coming off the loss, HHS head coach Dustin Kraske knows that the Ponies will have to improve on the court as they begin Northeast A competition.

"(We got to) keep playing better," Kraske said. "We have two fine conference teams coming in and this is when the conference championship begins to be determined so we got to play better."

The Ponies will get the weekend started Friday night with a game against Glendive. The Red Devils enter the game with an 0-3 record and 0-1 record in the Northeast A so far this season. The Ponies swept Glendive last season by an average margin of 30.5 points a game, so Havre hopes to carry on that trend this weekend. The Devils lost several players from last year but they do return honorable mention all-conference player Codi Nagle, so Kraske expects a fight on Friday.

"I like how hard they play and how they play together. I think that they have a fine basketball team," Kraske said.

Havre will then face Sidney Saturday afternoon. The Eagles enter the weekend with a 2-1 record, including a win over Glendive to begin Northeast A competition. Havre also swept them last year by an average margin of victory of 46 points.

The Eagles do return several players from last season. Jenna Anderson and Olivia Schoepp return for their senior seasons after being named honorable mention all-conference last season. Sophie Peters also returns after a second-team all-conference season last year for the Eagles. With these veterans returning, Kraske expects another tough fight to end the weekend.

"They've been in the program for a while and we're looking forward to playing them," Kraske said. "They've been pressing a little bit it seems on tape so we'll have to handle that as well."

The Ponies enter the weekend with a 2-1 record this season. After grinding out tough wins over Laurel and Malta to open the season, the Ponies lost to Billings Central last weekend in a rematch of last year's state title game. Along with getting the offense into more of a rhythm, Kraske hopes to recapture their defensive intensity after suffering their first loss of the season.

"It would be nice to get a little momentum by putting multiple defensive stops together," Kraske said. "That would probably be the number one thing. We have to get into the mindset that every possession matters."

The Ponies begin the weekend at HHS Gymnasium when they play Glendive Friday at 6 p.m. Havre then plays Sidney on Saturday at 5:30 p.m. Havre wraps up the 2021 portion of its schedule Tuesday night at home against arch rival Lewistown.