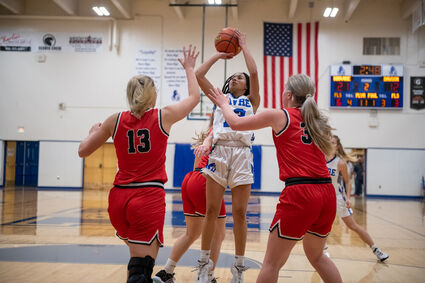 Havre's Kyanna Jarvis shoots the ball against Glendive at Havre High Gymnasium Friday night. The Blue Ponies defeated Glendive and Sidney this weekend to start conference play with a 2-0 record.

After an overtime loss at Billings Central, the Havre High girls basketball team was looking to bounce back in the friendly confines of Havre High Gymnasium this past weekend. If their games were any indication, the Blue Ponies have already put that loss well behind them as they defeated Glendive, 54-21, Friday and then defeated Sidney, 69-26, Saturday.

"It's a nice two games for us. I thought the second half (against Sidney) was maybe as well as we've played collectively," HHS head coach Dustin Kraske said. "I thought our kids were focused, ready to go and our rotations were good."