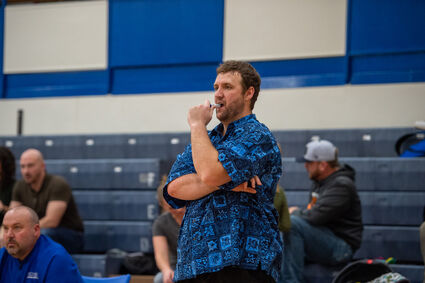 Havre High head coach Walynn Burgess coaches the Blue Pony boys in a game against Billings Central earlier this month in Havre, while wearing a blue Hawaiian shirt. Burgess wears the shirt to honor his late friend Griff Bye, who always donned Hawaiian shirts, and whom Burgess met while coaching at North Star.

As the high school boys basketball season started the last couple of weeks, some fans attending the games might notice every now and then a head coach on the sidelines wearing a Hawaiin-style shirt. One of those coaches is Havre High boys head man Walynn Burgess who wears the Hawaiian shirt occasionally to honor his late friend and longtime basketball coach Griff Bye.

"He always had his own style," Burgess said. "There's quite a few other coaches around the state that still do it. Just one of those cool things. If you've known Griff, you wear a Hawaiin shirt as the coach."