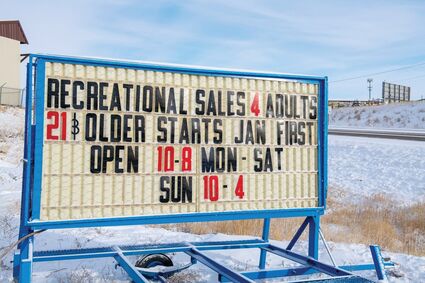 Recreational marijuana is now legal in Montana, and Hill and Blaine counties are two in which the drug is now purchasable for anyone 21 years or older.

Montanans approved the legalization in a ballot initiative in 2020, but the Legislature passed more regulations, including that it only could be sold in counties that voted to approve Initiative 190 in November 2020.

Despite the legalization of the drug for recreational use, there are a number of rules and regulations set out in Montana state law, and local governments are afforded the right to put in certain restrictions themselves.

City of Havre and Hill County

Hill County Commissioner Jake Strissel said there are no restrictions in Hill County beyond what is set out in state law.

Strissel said the county intends to add a 3 percent tax on the drug, in addition to the state's tax of 20 percent, which is allowed for under the state law.

He said the county does want to use the drug to raise some revenue, but otherwise they have no plans to implement any other local restrictions.

He said while Hill County clearly wanted the legalization, having voted for it 59 percent compared to the state's 56.9 percent, he does encourage people to be aware, both of the state laws about consumption and possession, and of the fact that marijuana is still a drug and must be used responsibly.

"It's a big change," he said. "The state voted for it 56.9 percent, and in Hill County it passed with 59 percent, so I know people in Hill County are more excited for this. I just hope we have a smooth transition, and I hope people do use this responsibly."

While Hill County doesn't have any particular restriction on marijuana consumption or sales, the city of Havre still prohibits dispensaries within city limits.

Beyond this restriction, however, the city has no local restrictions on consumption and possession.

Rules and regulations in Montana

The county and city are largely following the state's lead on legalization, and representatives from both are encouraging people to get aquatinted with the state's rules, both for sake of following the law, and for their own safety.

People are not permited to possess more than one ounce of marijuana, Havre Police Chief Gabe Matosich said, and it is still illegal for people to drive under the influence of marijuana, just like it is for alcohol or any other drug.

Law enforcement is permitted to stop anyone driving erratically and if they have probable cause to believe the driver is under the influence of marijuana they can have a DUI test administered.

Refusing a blood test can result in a temporary suspension of a driver's license.

Transporting marijuana in a vehicle is legal, but it cannot be kept in the passenger area, so it must be locked in a compartment or in the trunk and must be in its original unopened package, similar to open container laws for alcohol.

It is also illegal to consume or smoke marijuana in public or in public places.

Anyone 21 or older with identification can purchase the drug, including residents of other states and U.S. territories, as well as international travelers. However, it is illegal to cross state lines with the substance.

Businesses can scan customers' identification but are not permitted to keep those records for more than 180 days, and they are prohibited from offering it to the state or any third-party.

Residents are also permitted to possess up to two mature marijuana plants and two seedlings at home, as long as they are not publicly visible.

The drug is prohibited on national parks, and whether it's permitted on any given Indian reservation is largely dependent on how the tribe or tribes on the reservation handle legalization and how federal and state law interact with tribal law.

A trend nationally has been, due to marijuana being illegal under federal law, transactions for marijuana and related products tend to be done in cash, so most consumers should expect to pay for products that way.

Matosich said there are also restrictions on how dispensaries can operate.

In addition to not being allowed in city limits they cannot be open before 9 a.m. or after 8 p.m. 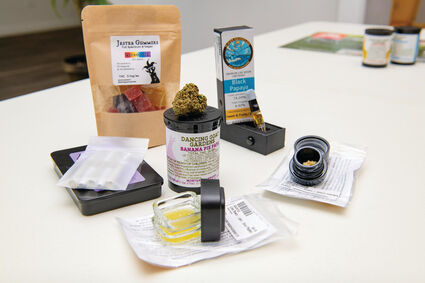 A variety of marijuana and marijuana-related products are displayed Thursday. Recreational marijuana became legal in Montana Saturday, including sales in Hill County outside of Havre city limits.

Strissel said all medical marijuana dispensaries, as long as they have been in operation since before the 2020 General Election, can begin selling marijuana recreationally but must get a new license at their first annual license renewal date after Jan. 1, 2022, and show compliance with statutory requirements as well as any local regulations in effect on or before Jan. 1, 2022.

He said all former medical dispensaries which continue to sell, cultivate, or manufacture exclusively to or for registered medical marijuana card holders are grandfathered from local regulations adopted after July 1, 2021, until their first license renewal date after Jan. 1, 2022.