Frontier is deep and balanced on the men's side 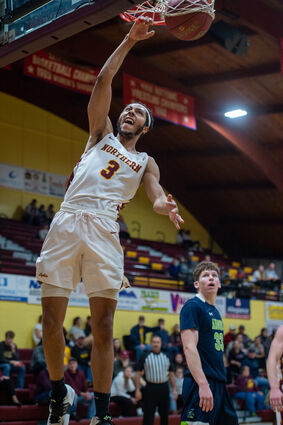 Montana State University-Northern's David Harris slams one home against the defending Frontier Conference champion Providence Argos last month in Havre. The Lights are off to a strong start this season as league play resumes this weekend. Northern was picked to finish fourth in the Frontier Coaches Poll.

Frontier Conference men's basketball is back, and though the coronavirus is still a black cloud hanging over all of college athletics, this winter is going to look a lot different than the last.

For starters, fans are back. Last season, the entire Frontier season was played in empty gyms around Montana. Secondly, the schedule has been changed. Last year, teams played each other on back-to-back days, and four times throughout the year, but the league has now returned to an unbalanced, three-game rotation. Also different is the length of the schedule on the calendar. The conference tournament will begin Feb. 22, meaning it's one of the earliest ends the Frontier regular season has seen.

And yet, despite all the differences, it's going to be one exciting year on the hardwood.

Here's a look at the Frontier, team-by-team, in the league's predicted order of finish.

OUTLOOK: The Fighting Saints are off to their best start in school history. They restart league play ranked No. 2 in all of the NAIA, and this coming off multiple appearances at the NAIA national tournament. The Saints are led by one of the best players in the country in senior forward Jovan Sljivancanin, a two-time All-American who averages 24 points and a whopping 12.2 rebounds per night. Point guard Shamrock Campbell is one of the best shooters in the league as well, while Ifeanyi Okeke is another veteran presence for the Saints, who scored 76 points per night, and allow just 57. With young depth as well, Carroll is not only going to be hard to beat in league play this season, the Saints are very much a national title contender.

OUTLOOK: It's been building since Adam Hyatt arrived. But, with so much returning firepower, this could be the year the Orediggers finally return to Frontier prominence. All-Americans Sindou Diallo and Taylor England (missed last season with an injury) are back, and are one of the best inside-out tandems in the country. Together, they're averaging 28 points per game thus far. But, the addition of Montana State transfer Caleb Bellach and his 15 points per game, as well as a deep roster of veteran players has meant Tech looks like they're ready to take the next step. Averaging 78 points per game, and playing as many as 12 players per night, the Diggers are going to be a handful all winter long.

OUTLOOK: COVID disrupted what was perhaps the best season in Argo history last year. Under the legendary Keller, the Argos won the regular season title and were poised to go deep in the NAIA tournament, before opting out. Graduation, however, hit the Argos pretty hard, and while they're still a high-scoring bunch (86 ppg), behind Marcus Stephens' 21 points per game, they'll have trouble repeating last year's feats. Still, veterans Rashee Stiocks and Dawson Fowler have gelled nicely with some of the Argos newcomers, and while they have a lot of new faces on the floor, Keller is still a great coach and the Argos are still a force in the league.

OUTLOOK: The Lights suffered a plethora of close losses last season, and yet, still went to the Frontier semifinals. Now, Northern is off to a great start under longtime head coach Shawn Huse, and the Light's fourth-place pick in the Coaches Poll could certainly be proven wrong. With super-seniors David Harris and Mascio McCadney combining for over 40 points per game, the Lights have easily the best guard combo in the league. Add to that a healthy Jesse Keltner down low, some steady newcomers and another hard-nosed defensive team that allows just 64 points per outing, and the Lights aren't going to be a sleeper this season.

OUTLOOK: The Dawgs are off to a solid start this season, having won some big non-conference games. Senior leaders Max Clark at guard and Jalen Hodges inside are giving Western plenty of scoring punch, while Jamal Stephenson, and veteran Tanner Haverfield are also playing well. The Dawgs also have good size in the interior, and are defending well, allowing just 63 points per night. But, with so many loaded teams in the Frontier field, Western is still a dark horse this winter.

OUTLOOK: The Battlin' Bears have fallen on tough times, winning just one game last season. And the Bears are big underdogs again this winter. Still, Dreikosen is one of the longest tenured coaches around, and he'll make the Bears a tough out this season, with returning forward Maxim Stephens leading with way. New Additions Abdul Bah, Tayshwun Bradford and former MSU Bobcat Jesse Owens are also helping bolster the Rocky attack, which has been strong offensively thus far. And with the Bears by no means a pushover, they're yet more proof as to why the Frontier is the toughest league in all of NAIA hoops.