Coaching candidate looks to pick up the pace at Northern 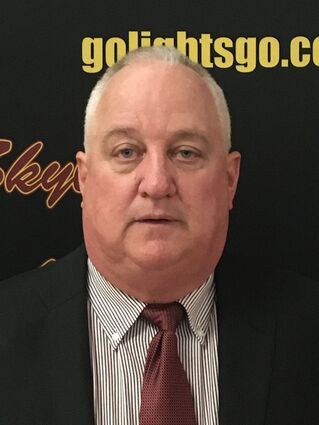 Over the past few weeks, Montana State University-Northern has been looking for a new head coach to take over the football program. On Wednesday at the SUB on MSU-N campus, local football fans got the chance to talk to the next coaching candidate, former Southern Oregon University offensive coordinator Kenneth M. Fasnacht. While it has been several years since the last successful season for the Lights, Fastnacht believes he can turn around the program quickly.

“There's an incredible opportunity here to succeed with the resources that I’ve already learned from just one day of being on campus,” Fastnacht said. “We’re going to go get the best athletes in Montana, Western Washington, Eastern Washington, Colorado, Idaho, Vegas and Arizona and bring them to Havre and have them graduate and compete for a national championship if I’m the next head coach.”

As a former offensive coordinator, Fastnacht wants to bring his fast-paced style offense to MSU-N. Fastnacht runs a no-huddle offense with a base tempo of about 10 seconds between the end of the play and the next snap. His offense uses zone-read run plays while the passing game will challenge the defense with deep passes. The offense also has run-pass options to take advantage of the defense as the play develops.

“It’s going to be the Ricky Bobby offense. We’re going to go fast,” Fastnacht said about the offense’ pace.

Fasnacht’s first experience with collegiate football came in the 1980s as a player. As a wide receiver, he played at Gardner-Webb University and Valdosta University. He did not immediately jump back into football until he was hired as an assistant coach at Nease High School in Ponte Verde, Florida, in 2002.

After two years as the wide receiver coach, Fasnacht was promoted to offensive coordinator, a position he held until 2009. During that time, the program played in three consecutive state championships in Florida, including a 2007 FHSAA Florida 4A State Championship win. Fasnacht also got the chance to coach future Heisman Trophy winner and NFL quarterback Tim Tebow.

Fastnacht then went to Columbia High School in Lake City, Florida, from 2009 to 2011. As the program’s offensive coordinator, the offense averaged 40 points and over 500 yards a game.

Fastnacht then got his big opportunity in 2011 as he was hired as the offensive coordinator for Southern Oregon University. From 2011 to 2021, Fastnacht coached one of the best offenses in the country as the Raiders averaged over 550 yards a game and 40 points a game in seven of his nine seasons there. Their high-scoring offense led the Raiders to four playoff appearances including a national championship in 2014.

Fastnacht also got to coach National Player of the Year Austin Dodge who has several passing records in the NAIA and is second all-time in career passing yards in college football with 17,265 career yards.

While Fastnacht has had a successful tenure at SOU, he believed it was time for a change. After half a year out of football, Fastnacht decided to apply for the open position at MSU-N. After nearly a decade with SOU, he wants to stay in the Frontier Conference because of the conference’s reputation.

In such a tough conference, Fastnacht would have his work cut out for him if hired as the next MSU-N coach. But if he can find the right players for his vision, he believes they can turn around the program.

“You just got to keep believing and keep the faith and work the plan,” Fastnacht said. “You just got to go out and make sure you get the right kid and you got to make it work.”