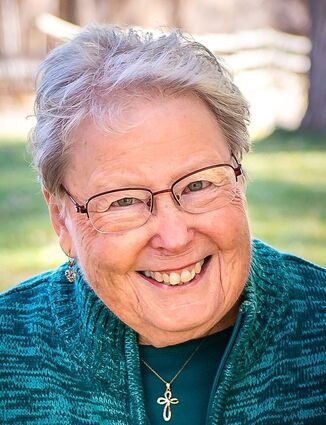 Darlene was born September 16, 1934, to Ewart and Lorna (Larson) Wattam in Havre, Montana. She was later joined by brother, Kenny, and sister, Betty Jean. Darlene grew up in Havre surrounded by wonderful cousins and a large, boisterous extended family.

In March 1953, Darlene met the love of her life, Robert Montgomery. Bob came to Havre with a seismograph crew, met Darlene and stayed. It was love at first sight. They were married on August 28, 1953, and enjoyed 62 years together before Bob's passing in 2016. Thomas was born in 1954 while Bob was in the service. After two years at Fort Sill, Oklahoma, they returned to Havre. Their family expanded with the arrivals of Peggy, Teri, and Bruce. They raised their family in the house they built from the ground up.

Darlene supported her family in all they did. She taught Sunday School and was a leader for Cub Scouts and Girl Scouts. She served as mother advisor for the Havre Assembly of Rainbow Girls, and she also was a member of the Order of Eastern Star. She was a member of the Van Orsdel United Methodist Church.

Bob was transferred to Helena in 1978. There, Darlene worked for the Department of Agriculture until she retired in 1995. When she retired, she started her "favorite job" as Granny Nanny. She cared for her grandchildren Matt and Annie before and after school. What a priceless gift for everyone!

During their time in Helena, Bob and Darlene were active members of the Moose Lodge and Women of the Moose. They spent many hours volunteering at the Lodge. Darlene held several higher degrees while involved with the Moose, college of regents, deputy grand regent, and star recorder. Darlene was involved in the Helena Senior Program and loved being a senior reader at the school her grandchildren attended. They loved their neighborhood in Treasure State Acres and made so many long-lasting relationships with their neighbors.

In 2008, Darlene and Bob moved to Augusta, a community they loved. Darlene was an avid school fan, attending all the school events, usually with her granddaughter Annie. Boy, could she cheer loud! Darlene was a member of the Augusta Community Church, the Augusta Senior Center, and the Augusta American Legion Auxiliary. She generously gave her time and love to the community.

Darlene had many hobbies over the years. She loved ceramics, stamp collecting, fishing with her husband and grandchildren, making cards and especially reading. She was an avid reader to the end of her life.

Darlene will be remembered for her loving, kind, forgiving, bubbly, outgoing personality. Her faith was the center of her life and she lived it out every day. Darlene never knew a stranger and was loved by so many. Her doctor affectionately called her "Little Miss Sparkle" a perfect nickname. Darlene was a WONDERFUL wife, mother, grandmother, "GG," and friend. She was dedicated to her family and friends.

Darlene was preceded in death by her husband, Robert; son Thomas; granddaughter Emily; her parents, and brother.