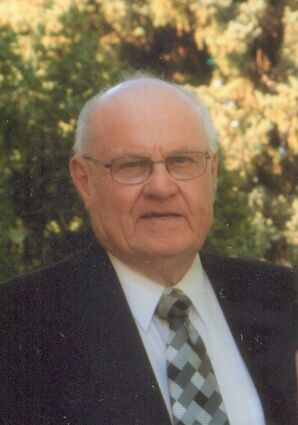 Floyd Witt, 92, a retired real estate broker, of Havre, passed away in the comfort of his own home on December 26, 2021, surrounded by his loving family.

Cremation has taken place, and a celebration of Floyd's life will be held in the spring.

His family has suggested memorial donations be made in Floyd's memory to the Spokane Shriner's Hospital for Children, 911 W. 5th Ave, Spokane, WA 99204, or the Havre Elks' Scholarship Fund, PO Box 910, Havre, MT 59501.

Please visit Floyd's online memorial page and leave a message of condolence for his family at http://www.hollandbonine.com.

Floyd was born July 3, 1929, in Nickwall, Montana, the oldest of four children born to Leslie and Iola (Baker) Witt. He grew up on a farm, where he rode his horse to a one room schoolhouse until he moved to Wolf Point in the eighth grade.

While in high school, Floyd met the love of his life, Lorraine Lund. After attending a trade school in North Dakota for autobody repair, the couple married in Chinook April 5, 1948.

He worked in auto body repair in Chinook and Glendive prior to moving to Havre, where Floyd found employment with Morris Dees at Dees Auto Body Shop. With his love of cars, he eventually became a salesman for Angstman Motors. Once in sales, he realized how much he enjoyed working with people which led him to his long-time career in real estate. He worked for Flynn Realty until 1969, when he opened his own office. Floyd often talked about selling 51 homes in 1969, falling short of his goal of selling one home per week. Don Loranger soon joined Floyd as a partner, forming Witt & Loranger Realty. Floyd met so many future friends through his sales of homes, farms, and ranches, and we all marveled at his ability to remember the buyers, sellers, and details of his sales many years later.

Floyd's civic engagement let him to join the Lions Club, the Eagles, and the Elks. He served on the board of Havre Chamber of Commerce and many committees of the Montana Association of Realtors and as president of the Havre Hi-Line Board of Realty. Most recently, Floyd served as chaplain of the Elks from 2008 to 2017. He met many lifelong friends through his affiliation in these organizations.

Over the years, Floyd enjoyed racing motorcycles, stock cars, go-carts, and snowmobiles. In his early years, he truly enjoyed living in a state without a speed limit. He especially enjoyed spending time with his pal, Dunk Bawden.

Floyd took great pleasure in the times spent at Swan Lake in the company of family and friends. His grandchildren and great-grandchildren were the highlight of his life.

In 1992, Floyd and Lorraine semi-retired and moved to Bozeman, where Floyd continued selling real estate alongside his son, Larry. They couple returned to Havre in 2006, and after Lorraine passed in 2007, Floyd spent time socializing with his coffee groups and telling jokes with his buddies at the Elks and Boxcars.

His ever-present positive attitude in life, storytelling, jokes and great sense of humor will be sorely missed.