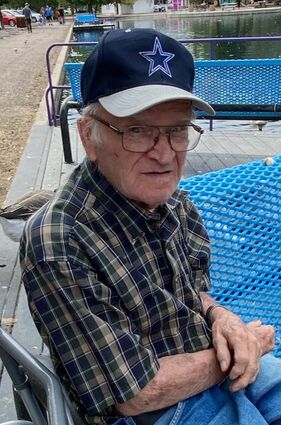 Jerry Thomas Darter of Havre, 90, passed away at home December 14.

Cremation has taken place. A graveside service will be held at 11:00 a.m. Monday, January 31, 2022, in Highland Cemetery, and a luncheon will follow at the Community Alliance Church.

Jerry's family has suggested memorial donations be made in his memory to the Havre Animal Shelter or the Havre Community Alliance Church.

Please visit Jerry's online memorial page and leave a message of condolence for his family at http://www.hollandbonine.com .

Jerry was born December 31, 1930, in Sikeston, Missouri, to Harrison and Lillia Darter, the second-youngest of seven boys and one girl. After high school, Jerry spent seven years in the armed forces. The day he left the military he met the love of his life, Eleanor, and the couple married September 29, 1956. He always loved to tell the story of how they met and how she changed his life.

They moved to Minnesota, where he attended St Paul Bible College and graduated with a BA in history and theology. There he began his career as a pastor for the Christian and Missionary Alliance Church. Together Jerry and Eleanor had three children, Erica, Darla and Richard. As a family, they moved wherever the Lord called them. Jerry pastored churches in Minnesota, Florida, Michigan, and Montana. When the couple decided to leave Montana, they moved to Arizona and California, where Jerry owned his own cleaning business. They chose to move back to Montana where they briefly lived in Cut Bank, owning and operating The Corner Motel. They settled eventually in Fairview where Jerry worked as a teacher aide with handicapped young people at the Fairview school in the woodworking shop, which he loved.

After retiring, they chose to move to Rudyard where Jerry spent his spare time woodworking and playing pool in his basement. He loved to grow a garden and spent his time with Eleanor and his two beloved dogs, Curley and Bert. He always looked forward to Sunday as it was important to him to attend church and express his strong, faithful relationship with God. He was proud of reading the Bible through every year at least once, if not more. After his wife died in November 2019, Jerry's family convinced him to move back to Havre so that his daughter, grandkids, and great-grandkids could spend more time with him and eventually take care of him.

He was preceded in death by his wife, Eleanor Darter, parents and all of his siblings.