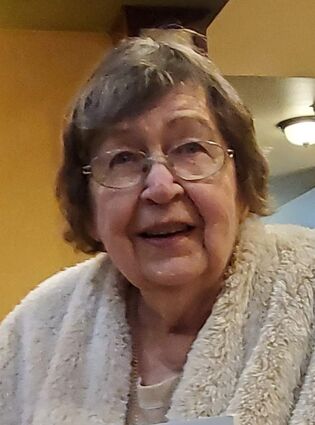 Lorna Jean Solberg was born July 28, 1936, to J.W. and Florence McDermand in Conrad, MT. In 1940, her brother, Jim, was born, completing their family. Lorna attended school in Conrad, MT, graduating in 1954.

In 1956, she married Elmo Simonson; to this union they had three daughters, Sandy, Cindy and Shelley. They moved to Havre, MT. Later they divorced.

Then she met Les Solberg of Malta, MT, while playing bridge. They married on July 15, 1973. They farmed south of Malta, where she also enjoyed gardening. In 1982 they purchased "The Bridge Center" in Bakersfield, Ca. While playing and teaching bridge, they made many lifelong friends. Lorna was an accomplished bridge player and along with Les they both became Silver Life Masters.

She learned from her mother, Florence, how to enter sweepstakes and entered for numerous years. She had many winnings "OOH-EEE-AH-OOO's!" She won trips all over the world. Including Hawaii, Major League Baseball All-Star Game in Boston, and her absolute favorite trip to Barbados. She won many nice prizes and a lot of funny ones too. She shared her prizes with her family!

Lorna welcomed and enjoyed company at her home, whether it was for playing cards, a meal or just a good visit. She was a structured and routine lady. Each day there were timely phone calls to her girls except during "Jeopardy," "I'll call you back" was her response. Speaking of "Jeopardy," there was a daily "Jeopardy" trivia question which was given to each family member. At the end of the week, points were totaled to determine the weekly winner. As you can see, she was very competitive.

Lorna crocheted many beautiful items. She gifted bedspreads, afghans, scrubbies and numerous other family requests. They are deeply treasured!

Lorna came from a small family. Their many gatherings were spent singing while Lorna played the piano. Her musical background led her to sing for each of us for every occasion. We will miss her "Happy Birthday" song!

Lorna cared deeply when her family members traveled. She needed to know how was the weather? How long it should take to get there? What flight number? And make sure to call when leaving home and call when you arrive at your destination.

She was proceeded in death by her parents, J.W. and Florence McDermand; brother, James McDermand; husband Les Solberg; a brother in-law and sister in-law, and numerous cousins.

Graveside services will be held at the Malta Cemetery in the sSpring. This will be a perfect tribute to our Mom, as the song "In the Garden," which has been passed on for three generations, will be sang to honor her.

Wilderness Funeral Home has been entrusted with arrangements and services.