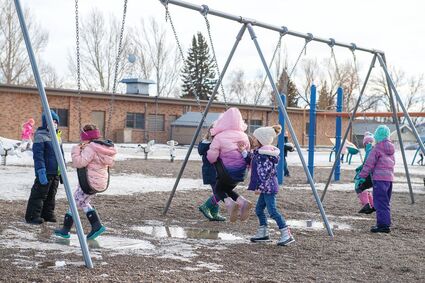 Children use the playground Wednesday during recess at Highland Park Early Primary School. The district is moving forward with an investigation of switching to a four-day school week, possibly as early as next school year.

Havre Public Schools may have a four-day week in the next school year as the district's Calendar Committee continues its work on a comprehensive report for the schools' board of trustees that will provide information and recommendations for the possible shift.

The committee has been working for the past few months to put together this document, which will detail all of the group's research into the ramifications of a four-day school week for Havre Public Schools and what they recommend to the board.

HPS Assistant Superintendent Brad Moore, who led Big Sandy's process of shifting to a four-day week, is leading the committee and said he thinks there is a very good chance that the Havre district could see the four-day week in the coming school year.

"Even if it's not this year, I do see it being in our future; I really do," Moore said.

He said the committee's report should be ready for the board's meeting Feb. 8, and he's hoping a decision will be made in their March meeting.

More and more schools across Montana have been modifying their schedules to include four-day weeks with longer school days, and it's a trend that appears to be increasingly popular.

Based on a recent survey conducted by the committee in Havre, support for the idea locally is very high, with almost three-quarters of the 563 respondents voicing support for the shift, around 17 percent expressing disapproval of the idea and the rest saying they were unsure.

More than 50 percent of respondents said they are strongly in favor of the shift and 11 percent were strongly opposed to the idea with the rest expressing less strongly held opinions on the matter.

The survey also asked respondents to identify what they think the biggest benefit of the four-day week would be and while staff morale, teacher retention and reduced absenteeism received a fairly even spread of votes, having more time with family was overwhelmingly identified as the greatest benefit of the possible new schedule.

Of all the possible benefits, increasing instructional quality received the least attention and in fact was identified as the greatest area of concern for respondents, while other possible concerns like finding Friday child care, effects on special education received less concern. The lack of food services on Fridays was identified by most respondents as the least important concern.

Moore said the committee is doing its best to get as much public input on the matter as possible and he thinks the document that will be presented to the board next month will address the most common concerns.

"I think it will answer around 90 percent of the questions people may have," he said.

He said he's proud of the work the committee has done, diligently researching various aspects of the issue and bringing their unique perspectives into the conversation.

"I've been very impressed by everyone's effort and work, and I think this document, once done, will be a really good source of information for any school looking at a four-day week," he said.

Moore said the committee will be holding a community forum Feb. 15 where members of the public can bring their concerns directly to the committee, but he asked them to submit questions and concerns by email to [email protected] in advance of the meeting, in case research needs to be done to address them at the forum.

Last month, the committee held a similar forum where they invited people from other school districts that had implemented four-day weeks to share their experience and expertise and answer commonly asked questions about the process.

Panelists almost universally spoke of the four-day week in positive terms and expressed confidence that HPS is handling the lead up to a possible transition effectively.

Moore said, regardless of the results of this process, this time has been valuable, bringing people from across the community to discuss ways to make the school system better.