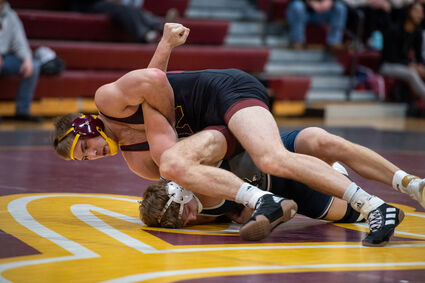 Northern's Isaac Bartel wrestles against Sam Adams from Dickinson State University at Armory Gymnasium Wednesday night. Bartel wrestled at 197 pounds and pinned his opponent 2:01 into the match. Bartel was one of five seniors honored for senior night and the Lights went on to win the dual, 52-0, to begin the spring portion of their schedule.

The Montana State University-Northern wrestling team is off to a strong start this season and even after their winter break the Lights showed no signs of slowing down as they defeated Dickinson State University, 52-0, in a dual at Armory Gymnasium Wednesday night.

"I thought our guys went out there and they asserted themselves and they set themselves up for the rest of the season," MSU-N head coach Tyson Thivierge said. "They did exactly what we've been working on: scoring points in bunches, getting bonus points and getting pins. I'm pleased but it's nothing to gloat about, and it's time...