Skylights take on Tech and Carroll with a depleted roster 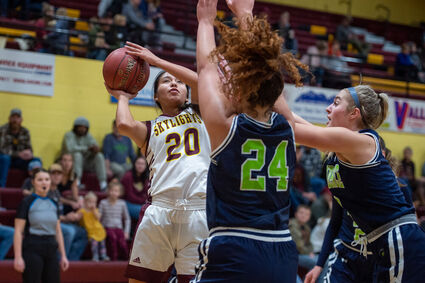 COVID-19 has struck again. And that means the Montana State University-Northern women's basketball team will be extremely short-handed for the first two games of what is set to be a four-game Frontier Conference homestand.

"We're going to be without some key players; we're extremely short-handed again this week," Northern head coach Chris Mouat said. "But this team has shown its resiliency. Kids are stepping up and accepting the challenge."

It will be tough sledding for Northern, which takes on Tech tonight, with both teams searching for their first conference victory of the season. The Skylights will have leading scorer Peyton Kehr at their disposal, as she averages 15 points a game, which is fourth in the Frontier. Riley Kehr and L'Tia Lawrence will also be a pair of players Northern will lean heavily on this weekend.

Tech, meanwhile, will counter Northern with the guard-forward combo of Mollie Peoples and Tavia Rooney. Peoples is one of the best point guards in the league, while Rooney is an inside force. Experienced players like Dani Urick and Brooke Heggie are averaging in double figures as well, for a Tech team that scores 66 points per night.

"They're really athletic," Mouat said of the Orediggers. "They've got great guard play, Tavia Rooney is dynamic inside, they're well coached, and they're really tough to defend. So we know we'll have our hands full with them."

But, as tough is it will be to play the Orediggers short-handed, things will be even more difficult against the Fighting Saints Saturday. At nearly full strength, the Skylights lost to Carroll 80-42 back in December in Helena, and now, with players out, the task of facing the Saints again is even more daunting, as Carroll comes to Havre led by former Blue Pony Dani Wagner's 16 points and six rebounds per game. Saturday's game in the Armory will likely be the last Wagner will play in Havre, in what has been an incredible athletic career.

Wagner, though, also gets help from what is the deepest team in perhaps all of NAIA basketball. Averaging 76 ppg, Carroll gets big time contributions from All-Americans Christine Denny and Jamie Pickens, while veterans Kamden Hillborn and Jaidyn Lyman are just two more of the many stars on the Carroll roster.

"Carroll is just really good," Mouat said. "And they've been playing well from the start of the season. They're deep, they pretty much do it all on both ends of the floor, and they're really well coached. To beat them, you have to play a pretty much near-perfect game."

Yet, as big as the task at hand is for Northern, the Skylights won't go quietly. They have been a strong defensive team at times this season and are tough on the boards. And, coming off two tough road losses last weekend, Northern will be hungry to turn things around.

That starts with tonight's game against Montana Tech, which tips off at 5 in the Armory Gymnasium. Northern is back in the Armory Saturday to face Carroll at 2 p.m.