In what was a historic senior year, Fort Benton's Aspen Giese literally did it all for the Longhorns 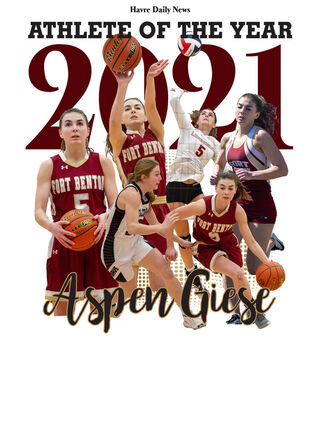 You could see it coming all the way back when she was a freshman - Fort Benton's Aspen Giese was destined to be a star high school athlete. And, though there were some bumps in the road, that's exactly what ended up happening.

Now, four years after Giese first burst onto the scene for the Longhorns, she's the Havre Daily News Area Athlete of the Year for 2021.

Her final school year was chalked full of exciting moments, accolades, trophies and medals, so much so, it's hard to put them all down on paper.

Of course, Giese biggest moment came last March when the Longhorns beat North Country to win the Class C state girls basketball championship - the first in the school's history. Giese, who was a four-year starter for a Longhorn's program that had won three District 9C championships, as well as the 2021 Northern C, fittingly sank a pair of final free throws before the celebration ensued on the floor of the brand spanking new Lockwood High School Gymnasium.

"I've been dreaming of this moment since I was so little," Giese said that afternoon in Billings. "You look through all the banners on our walls and you don't see a girls basketball one so just to be the person and to be the team that puts the banner on the walls is so big for us."

And no one was bigger for the Longhorns than Giese, who scored 19 points in the championship game, and would go on to be named the State Tournament MVP. It was the culmination of a brilliant basketball career for Giese, who was named Northern C All-State four times, and would eventually earn a hoops scholarship to Montana State-Billings.

Of course the state championship was only the middle part of an incredible senior year for Giese. In volleyball that fall, she earned All-State honors yet again, and helped her Longhorns make it back to the Class C State Tournament in Bozeman.

She wasn't done after basketball, either.

Last spring, Giese was dominant on the track, from the District 9C Meet all the way to earning four medals at the Class C State Meet in Missoula. In Missoula, Giese finished second in the long jump, sixth in the 400 meters and she was part of both relay teams that placed for Fort Benton. During her career on the track, Giese helped the Longhorns to District 9C titles, a Northern C championship and the 2019 Class C state championship as well, as several more trophies along the way.

And while track may not have been the sport most focused on, it was perfect example of the incredible three-sport athlete Giese is, and the culmination of what an incredibly successful high school career she had.

And that career ended with an amazing 2020-21 school year in which Giese was All-State in three sports, and has her name on more trophies than most can count. And that's why she was named Havre Daily News Female Athlete of the Year.

Editor's Note: The Havre Daily News Area Male Athlete of the Year will be announced next Friday.