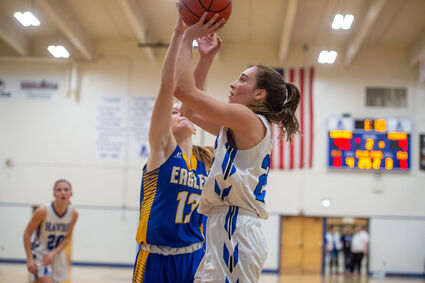 Havre High's Molly Huse, right, shoots over a Lewistown defender during an Eastern A game last month. The Blue Pony girls are home to host the Fairfield Eagles tonight. The Havre girls tip off at 7:30 p.m., with the Pony boys starting at 6.

After having their games against Browning on Thursday postponed, the Havre High boys and girls basketball teams are excited to be back in the Blue Pony Corral for a doubleheader tonight.

The HHS boys and girls will host Class B Fairfield, with games starting at 6 in the Havre High gymnasium.

This season has been one of growth for the Havre High boys. The Blue Ponies have shown what they are capable of in their wins while also displaying their youth in their losses.

"We're just going to have to come out and just be ready for a physical battle," HHS head coach Walynn Burgess said of ton...