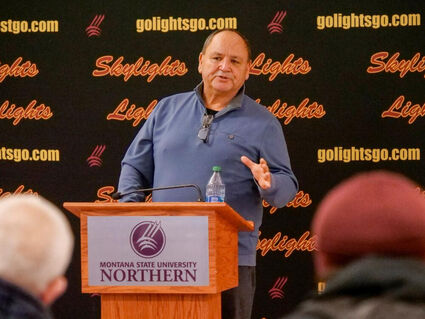 The Montana State University-Northern football program has had some very dark times as of late. Friday night however, the spotlight is shining bright on the Lights once again.

"I've coached for over 40 years now, and most recently retired, and then stepped back in as an assistant coach with Southern Oregon University. My time with SOU has been a truly wonderful experience, and I love the people and the program, but I've just gotten a different perspective on life due to recent personal events, and I decided that the chance to build a program at MSU-N was a really exciting opportunity for me," Souers said. "I'm excited to have an opportunity to coach in a state that I'm very familiar with. In many ways, it is like coming home as some of my fondest memories and friendship were formed in Montana, these are people that I've had long-standing relationships with. And the people at MSU-Northern are phenomenal; they're clearly such an intensely collaborative group. So I can't wait to join the community and be a part of that."

While Souers made a name for himself at NAU, where he was the program's winningest all-time coach, he also has strong ties to the Treasure State. He was an assistant coach at Montana for 12 years, and ascended to defensive coordinator for the Griz under Don Read, helping the Grizzlies to the 1995 NCAA 1-AA national championship.

The Grizzlies posted winning records every year during his stay, earned seven playoff berths, advanced to two national title games, and won a championship in 1995. He competed as a runner-up in the National Championship game in '96. Made National Playoffs in 1988, 89, 93, 94, 95, 96, and 97. During the title run, Souers' defense became the first in NCAA history to register back-to-back playoff shutouts.

Souers then headed off to Flagstaff, where he ultimately became the most successful coach by wins in Big Sky history. Souers finished his tenure at Northern Arizona University (NAU) in 2018 as the Big Sky's Conference's all-time leader in victories. He compiled a 123-114 career record, making him the winningest coach in school history. As the Head Football Coach at NAU, he demonstrated a 21-year record of achievement in enhancing academic performance, positive social conduct, and athletic success for their student athletes. He led their team to National Playoffs in 1999, 2001, 2003, 2013, and 2017.

Souers was the Big Sky Conference Coach of the Year in 1999, and the Eddie Robinson finalist in 2003. He was named the top head coach at the NCAA Division I-AA level, after leading the NAU Lumberjacks to their first Big Sky championship in 25 years, and an appearance in the national quarterfinal round. In total, the Lumberjacks made five postseason appearances under his direction and went 85-77 in Big Sky play.

"Jerome Souers is without a doubt one of the greatest coaches in the NCAA Div. I history. I am very pleased and excited that he has agreed to head up the Northern Lights football team," said MSU-Northern Chancellor Greg Kegel. "We pride ourselves on our ability to take students who are often at the bottom of the economic ladder and help them climb to the top of the economic ladder. Bringing in a coach like Souers will help our football team rise to the top of the Frontier Conference and compete for a national title."

Souers becomes Northern's third head coach since 2014, and he replaces Andrew Rolin, who resigned in November.

For much more on this story, see Monday's Havre Daily News.