Orediggers use strong second half to pull away from Skylights 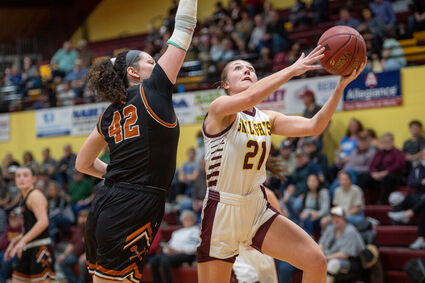 Northern's Ryley Kehr goes for a layup against Montana Tech at Armory Gymnasium Thursday night. After the game was tied, 25-25, at halftime, the Orediggers played strong in the second half to pull away for the 71-61 win over the Skylights. MSU-N has yet to pick up a win in the Frontier Conference this season.

The Frontier Conference has been tough for the Montana State University-Northern Skylights and it did not get much easier for them on Thursday night at Armory Gymnasium when they faced Montana Tech. While they were missing head coach Chris Mouat, the Skylights did battle early on trying to pick up their first conference win this season. But they could not keep up as Tech took control in the second half to win 71-61.

"We had some really good moments but then we also had some bad moments," MSU-N assistant coach Sierra Richards said as she took over coaching duties for the game.