Pony grapplers take on the best at prestigous Jug Beck 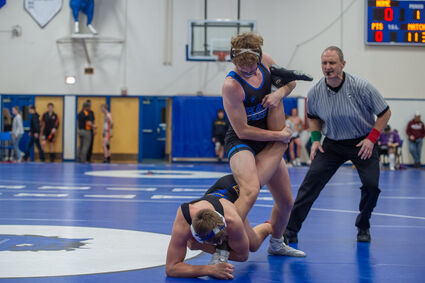 Kendall Pleninger, right, and the Havre High wrestling teams travel to Missoula this weekend for one of the toughest tournaments in the Northwest.

As the postseason fast approaches, the Havre High wrestling team hopes to be rounding into form over the next month. The Blue Ponies will get a chance to improve this weekend when they head to Missoula for the Jug Beck Rocky Mountain Classic. Even though it will be a large tournament with schools from several states, HHS head coach Beau LaSalle believes the expectations are the same as always.

"We just want to go out and compete hard," LaSalle said. "We get to see some different guys and see what they have to offer and just see how we stack up against some of the best in the Northwest."

Powell will come from Wyoming while Coeur d'Alene and Lake City come from Idaho. The Washington schools will be Spokane, Ferris, Meads and University High. With such a diversity of schools at the tournament, LaSalle expects a tough weekend.

"The level of competition across the board at this tournament is really high. There's just good kids from each team," LaSalle said.

The Ponies, who have had a ton of success in Missoula before, opened the 2022 portion of their schedule with a second-place finish at the Cut Bank Invitational last weekend. Many Ponies placed there and will look to do the same this weekend in Missoula. Orion Thivierge, who wrestles in the 170-pound weight class, looks to continue wrestling well as he has a pair of first-place finishes in the Havre and Cut Bank Invitationals and a second-place finish at the CMR Holiday Classic this season.

Many other Ponies will look to place again this season. Randy Tommerup is wrestling well at 205 pounds. At Havre and Cut Bank, Tommerup took first in both tournaments. Kale VanCampen, who has wrestled at both 170 and 182 pounds, has a second-place finish at Havre and a pair of third-place finishes at CMR and Cut Bank. Riley Pleninger took first at 152 pounds in Havre and second at 145 in Cut Bank earlier this year.

The HHS girls wrestling team will also be competing in the tournament in Missoula on Saturday. After missing the early portion of the season, Aaliyah Stiffarm has worked her way back onto the mat with a first-place finish at 205/285 pounds at Cut Bank last weekend. Maleigha Fuzesy will also look to place again at 132 pounds after taking second in CMR and third in Cut Bank.

The Ponies begin postseason competition with divisionals on Feb. 5 in Laurel. With just three more weekends of competition before then, the Ponies hope to use this weekend's tournament to continue improving in order to be ready for the postseason.

The Ponies will begin the Rocky Mountain Classic today and it runs through Saturday night.