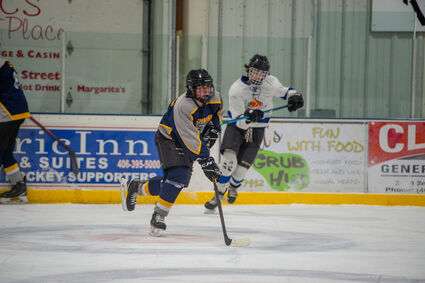 Jared Rosgaard skates against the Flathead Fusion at the Havre Ice Dome last month. With just about a month left, the senior hopes for a strong finish to his Havre Ice Hawks career.

One player making an impact for the Ice Hawks is senior Jared Rosgaard, who is having a great time in his final season with the club.

"This team has been a lot different than any other I've played on any other year," Rosgaard, and HHS senior said. "A lot of stuff just clicks when we're on the ice and that's when the good stuff happens so it's been great."

Rosgaard did not always play hockey because bask...