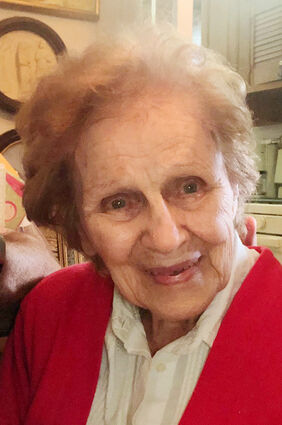 Bernice Marie Hoveland passed away peacefully in her Bethesda, Maryland, home on January 12, 2022.

Born September 23, 1917, in Havre, Montana, she was the middle child of Olga Marie Olsen and Paul Stefanus Ragnvald. Bernice had fond childhood memories of growing up in the small prairie town of Havre with her Norwegian immigrant parents and siblings, Esther and Robert. She loved sharing these memories with her children and grandchildren.

Bernice was a 1934 graduate of Havre High School and a member of the Norwegian Lutheran Church, where she was baptized and confirmed. She and Stanley Bertin Hoveland, also of Havre, were married in that church on May 15, 1937. They made their home in Montana for five years, during which time their first two children, Roberta Jeanne and Edward Stanley, were born.

After Stanley accepted a job with the United States General Accounting Office in 1942, the family moved to Washington, D.C. They lived in an apartment on Capitol Hill, made new friends, and joined the nearby Lutheran Church of the Reformation, where Bernice was a lifelong member. Shortly after their move, Bernice took a job as well, working full time in the accounting office of the Security Storage Company in Washington. She worked there for 40 years and was the assistant to the treasurer at the time of her retirement.

In 1948, the family left D.C. and moved to East Pines, Maryland, where their third child, James Ole, was born. The family moved again in 1964, this time to a house in Bethesda, Maryland. Bernice lived in that house for the rest of her life.

Bernice and Stanley were extremely proud of their Norwegian heritage. They were members of the Sons of Norway and enjoyed meeting other Washingtonians of Norwegian descent. Bernice was active in the Norwegian Society as well and served as its secretary for 15 years. She also did extensive research into the Ragnvald and Hoveland family ancestries and in 1971 traveled to Norway with Stanley and her siblings. The four of them enjoyed a trip of a lifetime traveling throughout the country, finding their parents' birthplaces, and meeting many of their Norwegian cousins. Not long after their return to the states, Stanley had a heart attack and died on September 25, 1971.

Bernice married John Hardy on August 13, 1973. After they both retired, Bernice took up golf and enjoyed playing in the ladies "9 holers" league at Montgomery Country Club, where John, an avid golfer, was a charter member. They also enjoyed traveling. With the Washington Skål Club they toured the United States and Europe and took more than 20 cruises in the Caribbean. John died on September 29, 2014.

No matter where she went, Bernice always carried her camera. She took thousands of photographs of family gatherings and of her many travels, most of which she carefully labeled and placed in special albums. In her later years when she could no longer travel, she particularly enjoyed looking through her albums and reminiscing about the people and places she had known and loved.

Bernice was extremely proud of her three children and the lives they had made for themselves and their families. She adored her five grandchildren and 13 great-grandchildren and was so grateful for all the time she was able to spend with them over the years. Bernice leaves behind her loving family, inspired by their remarkable matriarch and grateful to have had her in their lives for so long.