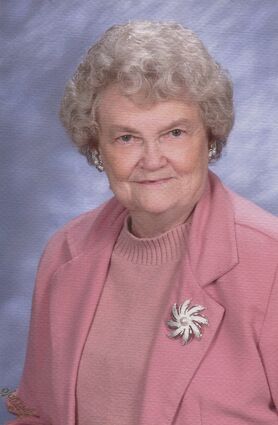 Cremation has taken place, and memorial services will be held at 11:00 a.m. Thursday, January 27, 2022, at First Presbyterian Church in Havre. Committal of her remains will be with her husband Bob in Cody, Wyoming, at a later date.

Holland & Bonine Funeral Home has been entrusted with services and arrangements. Please visit MaryJo's online memorial page and leave a message of condolence for her family at http://www.hollandbonine.com .

MaryJo was born in Washington, D.C., as Florence Eunice Bratcher July 23, 1934, to Eunice and Benjamin Bratcher. Her mother passed away seven days later from complications of childbirth, and her father agreed to let her cousin Josephine and husband Nelson Maxwell adopt her, so September 17, 1935, she became MaryJo Maxwell.

During the summer of 1955, she worked at Yellowstone National Park, where she met her cowboy, Robert Leroy Scott. They were married September 17, 1955, in Laurel, and in 1956, their first daughter, Linda Jolee, was born in Billings. In 1957, they moved to Cody, WY, and welcomed two more children, Pegi Jane in 1957 and Robert Maxwell in 1958. After her children were all in school, MaryJo went back to work as a substitute teacher, and, in the mid-1970s, she served as the Northwest District representative helping to get the HeadStart program up and going in Wyoming.

In 1988, when her husband Bob retired, the couple moved to Dillon, where they purchased the Western Apartments that her grandparents had owned, bringing them under family ownership again.

While in Dillon, MaryJo served as a board member for the Dillon Community Health Center. She was very active in her churches, the United Methodist Church in Cody and the Presbyterian Churches in Dillon and Havre, serving in many positions. She was part of the Cody Little Theater, Eagles Auxiliary, and was very active in the Eastern Star. MaryJo also worked with many youth organizations, including 4-H, Boy Scouts, Little League Baseball, and Job's Daughters.

She was preceded in death by her husband, Bob; son, Bobby; great-grandson Isaac Gluyas; parents, Josephine and Nelson Maxwell; and sister and brother-in-law, Jackie and George Melvin.

A special thanks goes out to her Friday lunch gang, August, Elliott, Joey, Cole, and Zeb, for making an old lady feel special.