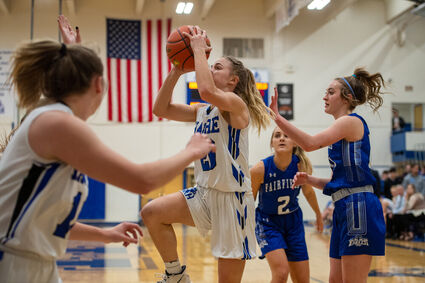 Avery Carlson and the Havre High girls host the Malta M-Ettes tonight in the HHS gymnasium.

"It's going to be a tough battle and we're going to have to play good to have a chance. It's not where you just walk in the gym and it's an easy walk through," HHS boys head coach Walynn Burgess said. "After a long road trip like we just went through, it's going to be a test for these boys to see what they're made of and we're excited for that opportunity to see where we're at."

The HHS boys played an exciting game against the Mustangs earlier this season when they played in Malta back in December. After the Ponies had an early lead, the Mustangs took control as they led, 39-29, with just over two and a half minutes left in the game.

In the final minutes of the game, the Ponies went on an 11-0 run to come back for the win. Josh Currie was a force during the run as he scored nine points during this, including the 3-pointer to take the lead with 3.5 seconds left. With their comeback against Malta earlier this year, Burgess hopes his team took away that their defensive intensity is key to victory.

"We can shoot bad and still be in games if we rely on our defense," Burgess said. "Two things you can control are your attitude and your effort. I felt like they did a pretty good job of controlling both those things in that game that gave us the chance to win the game."

The Mustangs should provide another tough test in the rematch. The Mustangs are now 6-4 on the season and have several players that could give Havre trouble. Connor Tuss will look to play well again as he scored 18 points against Havre earlier this season. But Burgess believes the Mustangs' depth and growth this season could give the Ponies some problems.

"They got a few young kids that have been stepping up and have gotten a lot of time on a varsity court. I don't consider them freshmen anymore after they've had that many games this far into the season," Burgess said. "It's a good matchup. Anytime you ever play Havre versus Malta, we know it's going to be a rivalry game and we appreciate the challenge."

If they are going to outlast the Mustangs again, the Ponies will need their best players to step up again. Currie will look for a repeat of his performance against Malta as he scored 19 points in the win. Xavier Butler will also look to make an impact again as he scored 10 points. Caden Jenkins will try to get things rolling on offense as he leads the Ponies averaging 10.4 points a game this season.

The HHS girls basketball team also played Malta earlier this season, a game the Ponies won 43-40. The Ponies had a strong start to the game as they led, 23-10, at the end of the first quarter. But the M-Ettes battled back and even took a lead in the fourth. The Ponies were able to rebound to win the game, but HHS girls head coach Dustin Kraske hopes to see a more complete performance this time out against the M-Ettes.

The M-Ettes will need to get their offense going if they want to get revenge against the Ponies. In their previous matchup, the M-Ettes had a balanced attack as Allison Kunze, Addy Anderson and Kylee Nelson each scored 10 points in the competitive game. If the Ponies do not bring their 'A' game tonight, the M-Ettes will take advantage.

"Malta is incredibly well coached," Kraske said. "Those youngsters play hard, they play very well together and they're not afraid of anything." 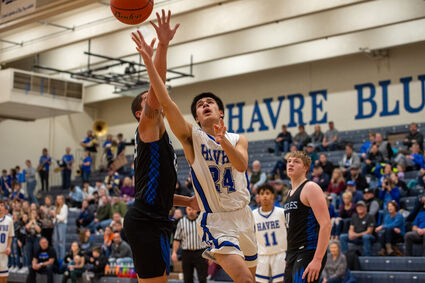 Havre's Shane Patacsil shoots during a game against Class B Fairfield earlier this month. The Ponies are home to play Class B Malta tonight.

The Ponies have won eight games in a row thanks to several strong performances. Yelena Miller is averaging 12 points a game this season and she led the Ponies with 14 points against Malta earlier this year. Avery Carlson is also playing well with 11.4 points a game this year and she will look to make an impact again after scoring 11 points against Malta back in December.

After their road trips against conference opponents, both teams look forward to returning home and getting the chance to compete in front of friends and family. In a friendlier environment, they hope to use that energy to play well.

"It's different playing at home," Burgess said. "It's nice to come back and get back in the home confines of the corral and have the crowd cheer for you."

The HHS girls will play Malta at HHS Gymnasium tonight at 6 p.m. The HHS boys basketball will follow them with a game against Malta at 7:30 p.m.